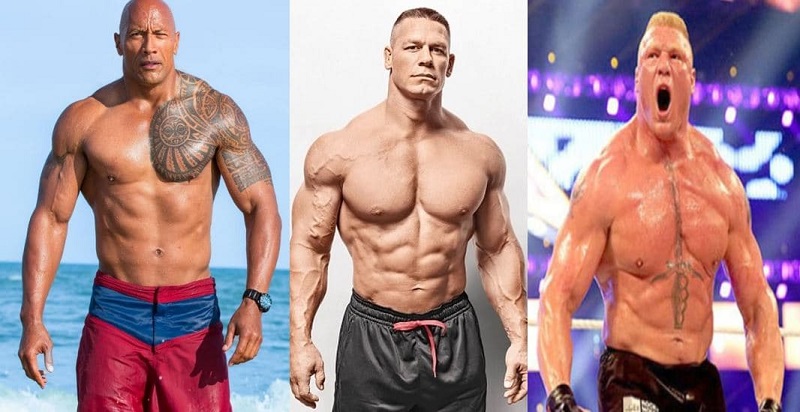 WWE is professional wrestling, WWE has a huge fan following and it is one of the most popular shows that most people watch, and some wrestlers have made a lot of money and earned hugely and even have earned a lot of fame from this. Wrestling is something that needs physical and mental strength and very few wrestlers are there that give their best. So here are some wrestlers who have well-paid fees and some richest of them so now let’s check out Top 10 Richest WWE Wrestlers in the World 2021.

Here you can check out some famous richest wrestler and their net worth is not only from wrestling source but also from different factors such as endorsements, Ads, Movie and many more things.

Dwayne Johnson who is famously known by his ring name ‘The Rock’ he is not only a wrestler but a producer, cricketer, businessman, and an American actor he is one of the famous actors and one of the richest people with a net worth of $380 million. He has been awarded for many of his WWE achievements and is part of many successful films like Game Plan, The Mysterious, and many more.

John Sena is an American professional wrestler, actor, television presenter he has been one of the greatest wrestlers of all time to pursue his career as a bodybuilder he went for wrestling and that was the day when the tables were turned he was signed for WWE and WWF in the year 2001 and he has won the championship title for thirteen times, five-time United State Championship, a four-time World Tag Championship. In 2021 he will be seen in some upcoming movies like F9 and The Suicide Squad.

Paul Michael Levesque is better known by his ring name ‘Triple H’ he is an American professional wrestler, business executive, and actor he is the vice president of Global Talent Strategy Development and COO for WWE. He has worked hard to achieve a lot of success in his life and he did it. He has won a number of championships in his life like; Five-time Intercontinental championships, a three-time world tag championship, and one unified WWE Tag Championship, and many more.

Stone Cold Steve is an American television, host, actor, and retired professional wrestler he is widely regarded as one of the greatest and most influential professional wrestlers of all time his net worth is around $ 30 million. Throughout his career, he has won a total of 19 championships a two times WWF intercontinental championship, a four-time WWF tag, and many more.

Terry Eugene Bollea who is famously known by his ring name ‘Hulk Hogan’ he is a retired professional wrestler and television personality he is one of the famous wrestlers in the 1990’s because of the style that he carries and the way he plays in the ring it was something very different. His net value is $25 million he was one of the most successful people in the back time.

Brock Lesnar is a Canadian professional wrestler and also a professional football player who is best known for his time in WWE and UFC he has been part of many wrestling tournaments and he has always given his best he has a huge fan following across the world and his net value is $22 Million. He has also won back-to-back titles in the years 1991 and 1992.

Paul Donald is an American professional wrestler and actor, he is best known for his tenure with WWE, and due to his large frame and all looks he was famously known as ‘The Big Show’. In his career of wrestling, he has achieved many titles and championships some of them were; World Champion with multiple championships in which there is WWE and WWF championship twice, ECW heavyweight Championship, and many more.

Mark William Calaway is better by his ring name ‘The Undertaker’ he is an American retired professional wrestler. Over three decades he is still one of the best wrestlers one could have he have very strong mental and physical energy and his career from 1990 to 2020 were very successful and bright he has won many title or championships under this year and his net worth is $18 Million.

David Batista is an American actor and professional wrestler he is known for his time in WWE and outside the wrestling, he is also known for his acting in Hollywood industry he has won many championship titles; he is a six-time world champion by winning the World Heavyweight championship four-time and there are many more titles he is a very hardworking person.

Randy Orton is an American wrestler and an actor, he is third generation wrestler whereas his father, grandfather, and uncle were all in wrestling in their career. also worked hard on himself and make their family proud they didn’t let anyone down he has also achieve a lot of championship title in wrestling career not only this he was also a great actor in Hollywood.