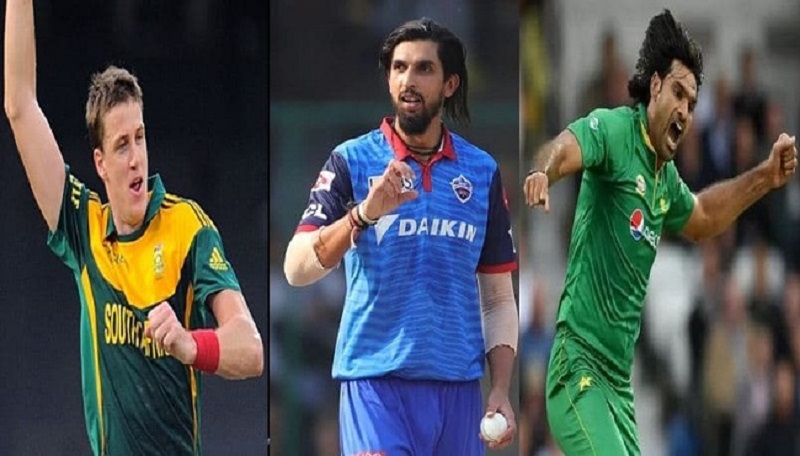 Cricket is a game which is played between two teams of eleven players in a field, Cricket is one of those games which requires a lot of mental strength as a player you must be a step ahead of your opponent’s team. Well, height doesn’t really make much difference but being tall has its own set of advantages. So check the Top 10 Tallest Cricketers in The World.

Usually, they are born with such an ability and most of the tallest cricketers are bowlers and they make the game more fascinating for people. Here is the complete list of the top 10 tallest cricketers in the world of all the time whereas the two tallest batsmen are also there who have played international cricket.

Mohammad Irfan was born on 6th June 1986 in Punjab, Pakistan he is one of the tallest cricketers in the world with a height of 7’1. Due to lack of employment and some other opportunities, he has to work at a plastic pipe factory and after a certain time he never gave up on his dream, at the age of 27 he makes cricket his profession where many coaches were not able to feel his talent in it. Currently, he represents Pakistan’s National Cricket team.

Joel Garner who is also popularly known as ‘The Big Bird’ he is one of the tallest West Indies bowler his height is 6 feet 8 inches. In the ’70s and ’80s West Indies was World’s No 1 Test and ODI Team even when they lost the world cup in the 1983 final to India, they did not lose a single Test Series span for over 15 years. His most memorable best ever bowling performance was 5 of 39 he achieved in the 1979 Cricket World Cup against England.

Bruce Reid is an Australian Cricket player, he is the second tallest player to played the game at an international level, he is a left-arm pace bowler. He has represented Australia in Test Cricket between Dec 1985 and Dec 1992 and in ODI’s between January 1986 and March 1992.

He is the second West Indies right arm fastest bowler, he is born in Antigua on September 21, 1963. Curtly with his partner in crime Courtney Walsh he has formed one of the greatest opening bowling partnership due to his height and excellent bowling the bounced pitch which is a danger for any of the finest batsman, he is a man of few words where he avoids many interviews and not to talk much after some time he has become a musician.

Tom is an Australian cricketer he was born on October 2, 1965, Tom was more in part-time bowling and he appears in 8 Test and 76 ODI’s for Australia from 1989 to 1999 due to his back injury he didn’t stay for long his career was short because of his height he has prematurely taken the retirement. But he has been one of the active cricketers after being a coach of Sri Lanka from 2005 to 2007.

Jacob is a New Zealand cricketer he has medium-fast bowling skills and naturally aggressive towards batting, he is one of the 36 New Zealand to score 1000 runs in test match cricket. Currently, now Jacob plays for New Zealand in a shorter format of the game in New Zealand domestic championships and Rajasthan Royal in IPL, he has played well in World Cup.

Abey is an Indian cricketer born on Aug 8, 1968, he has the ability to swing the ball in different variations, in his first full season of Bombay in 1991 to 1992 where he was expecting to get a tour of South Africa in 1992-1993 he was not selected unfortunately in the final squad. Afterward, he was never considered to play again for the country and he retired from first-class cricket.

Peter is born in New Zealand in Christ-Church on Feb 1, 1979. After 2003 he was showing his consistency making 728 runs at 42.82 including two more centuries one day Wisden was too early to call him “one for the future, provided he could retain his simple, uncomplicated batting style”.

Morne is a South Africa cricketer he was born on October 6, 1984, and made his first-class debut in 2003 and 2004. After participating in Delhi Daredevils in 2011 in the IPL he has made his bowling skills more smoothly and sharpen. Whereas in Domestic cricket he plays for Yorkshire.

Ishant is an Indian cricketer he is basically called as ‘Lambu’ means tall by his friend he is born on September 2, 1988, he has played well in an India team and remains his consistency he has super talent and highly skills in the bowling field where he can choose as bowling permanent spearhead. The above mention were the top 10 tallest crickets to date and they will keep changing in the years that are going to come.

How to Watch Tokyo Paralympics 2021 Live on Eurosport TV in India Viewers?