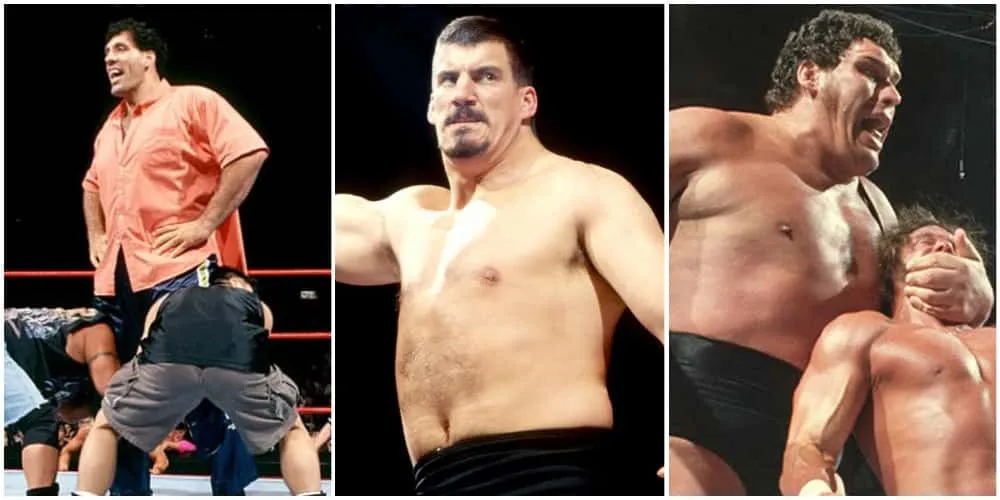 Top 10 tallest wrestlers of all time. The WWE’s Golden, Generation, and Transition Eras were exciting. The three prior eras helped professional wrestling achieve legitimacy before the Attitude, New Generation, and Ruthless Aggression eras.

Promoters promoted good shooters to the main event to give the sport respectability.

Many of these giants helped wrestling promotions gain income.

Giant Gonzales, Giant Silva, Andre the Giant, and Do Reis packed venues. Japan’s wrestling fans were willing to pay anything to see these giants in action.

Giants’ popularity has dropped, but they remain an important component of professional wrestling, so we’ll continue to see them.

Average-sized athletes dominated the WWE for years, and giant-sized athletes appeared to be on their way out. Big Cass and Braun Strowman emerge in the 2010s to put the locker room on notice.

Despite what happened, many wrestling fans want to see one of the best duos soon.

From the beginning, wrestling promotions have been enamoured with the size, so the WWE signing Kurrgan wasn’t a surprise (Robert Maillet). WWE hoped Kurrgan’s career would be successful, given his size, but he was a terrible wrestler.

Kurrgan joined The Truth Commission in 1997.

WWF dispatched the group to the developmental areas to hone their skills. After a short period in the regions, the group was promoted to the main roster. Maillet chose the moniker The Interrogator.

The Big Show’s failure as a monster/wrestling behemoth has been debated. The Big Show often looked like a big guy. The Big Show is no Andre the Giant, Kane, or Great Khali.

The WWE would have avoided angles and stories that made him look weak, including tearful sequences.

The Big Red Machine was a respected wrestler in his heyday. Kane’s passion for his persona and dominance made him a renowned 90s wrestler. Kane was the first wrestler to threaten The Undertaker’s dominance in the WWE and became a WWE staple.

Kane’s gimmick changed over the years, but he always gave 110% in the ring. Kane provided us with fantastic bouts that we can all look back on and agree were great.

7’1″ At his best, Punjabi Playboy was unstoppable in WWE. Khali never had legendary fights, but he was invincible, which made him remarkable.

The Great Khali’s career highlight was the 20-man battle royal.

He won and became the world heavyweight champion. The Great Khali is one of the few to beat the Undertaker in under 10 minutes.

The Great Khali later feuded with John Cena. His on-and-off feud with Mysterio stood out more than his feud with Cena.

Their diverse wrestling styles made their matches fascinating despite size differences. Rey Mysterio spent the bout trying to pin The Great Khali.

The Great Khali was sometimes too powerful, despite his successes. The WWE turned The Great Khali into a ludicrous figure, making him one of the worst wrestlers of all time.

Ron Reis was a WCW star noted for his two-handed chokeslam. WCW tried to make Ron Reis an icon, but none of his gimmicks caught on.

WCW also tried to change Ron Reis’ gimmick by dressing him like a ninja. The new gimmick was discontinued after three appearances, as planned.

In 1997, Gonzalez turned pro and signed with the WWF.

Giant Gonzalez joined The Oddities as a cornerman in the WWF. Giant Silva’s wrestling career failed, and the WWE dropped him in 1999.

Silva signed with Dream Stage Entertainment in 2003 and participated in PFC. Giant Silva won two UFC battles through submission and lost six via submission and knockout.

Omos is the third tallest wrestler of all time, the youngest WWE wrestler, and the only New Age wrestler to make the top 5. Omos, a Nigerian basketball star, switched to pro wrestling.

Omos joined WWE in 2019 and spent months in the Performance Center.

Omos spent his early months honing his talents before making his in-ring debut in July.

Omos debuted on Monday Night Raw in June 2020 as a part of Akira Tozawa’s Ninja group. During a tag team bout against The Viking Raiders and The Street Profits, WWE commentary called Omos the giant ninja.

Omos debuted at Wrestlemania in April with AJ Styles versus The New Day.

Andre the Giant had gigantism and acromegaly as a child. At 12, Andre the giant was 6’3.

Rousimoff began wrestling in France, where he met Canadian Promoter Frank Valois, who became his manager.

Vince McMahon suggested presenting Andre the Giant as a monster.

Vince McMahon, Sr. increased Andre the Giant’s demand, and he travelled the world for months before making his WWF debut.

After a few months with ECW, Giant Gonzales became a main eventer.

Fans were impressed with EL Gigante since towering behemoths were popular at the time. Giant Gonzales left WCW for WWE.

Gonzalez turned heel in WWE and was mentored by Harvey Wippleman, a despised manager at the time.

Gonzalez was dismissed from WWE in 1993.