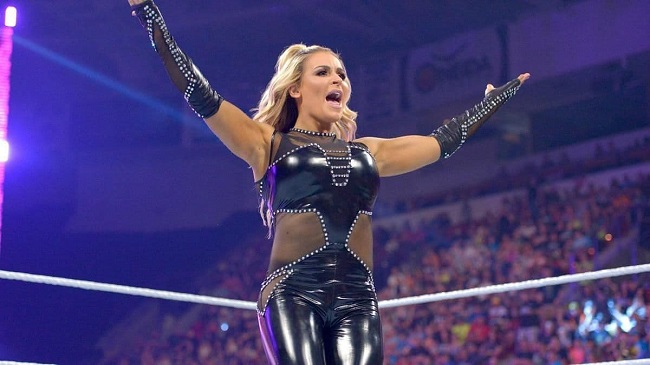 World Wrestling Entertainment which is an American entertainment company, as we know women have contributed to various onscreen roles. But there were some women who wanted to be a real heroes of life by giving a real tough competition. Check Top 10 WWE female wrestlers in the world.

There are some Diva female performers who are super talented and, as we know in today’s generation females are capable of doing and performing things well. So there are some women who have marked their name in WWE Female wrestler. So let’s check out the details below.

Sasha Bank is an American professional wrestler who is currently signed for WWE, she is one of the most independent circuits. Banks have also won the Chaotic Wrestling Championship, not only this in the year 2015 she was the first iron woman match to ever headline an NXT take over.

In the year 2020, she was named Wrestler of the year, and not only this she has won many titles and tournaments in her life. Being such a great player she has an income of $250,000.

Carmella who belongs from Massachusetts, U.S she is a professional wrestler who signed to WWE, but she is not only a wrestler but also a dancer, model, and actress. She is also a fitness instructor who guides the female player and her income is  $260,000.

She has done a little hard work and in the year 2018, she became the first woman in WWE history to successfully cash in her Money in the Bank opportunity. Not only in this but she has also won many titles and awards in her wrestling career.

Nia Jax is an Australian professional wrestler who is always best known for his WWE, her name under ring name is Nia Jax. She has also won Raw’s Women Championship, whereas she is always working hard and giving her best in rings.

She always comes confident and hard enough and gives a tough competition, to their opposite partner. Not only this but she makes her best in each tournament.

WWE pays her $300,000 because she is very much capable of it, also she is the first woman to hold both the WWE Divas Championship.

Bayley is an American professional wrestler who has signed for WWE, She has also performed on the SmackDown wrestler. Bayley is also good at producing she is a temporary producer due to ACL she is currently a little bit inactive.

Martinez made a good income from the wrestler, where she earns around $350,000, and not only from this her other source of income is also from producer and everything. In her wrestling career, she has won many awards and titles.

Asuka is a Japanese professional wrestler who currently signed for WWE, is also a free agent performing under the name Asuka. Due to the pandemic situation, she has been a little inactive and involved in other kinds of activities but soon she will be active.

She is one of the most talented wrestlers who has earned $350,00 from WWE, Asuka has also won so many titles and awards from her wrestling career.

Alexa Bliss who belongs from America is an American professional wrestler who currently signed in WWE in the year 2013. Later in the year 2016, she made her debut on the Smackdown brand, and after on she became the first woman to hold the title twice.

Bliss is one of the most talented and skillful players, also she was the first woman to win both Raw and Smackdown women titles. She has won many titles and championship and her earning is around $350,000.

Charlotte Flair who is a second professional generation American wrestler she is the daughter of Ric Flair and in the year 2013, she started her training 2013. But she has given all her best she won the Divas Championship, the NXT women’s championship two times.

Ronda Rousey is an American professional wrestler, actress judoka, and former mixed martial artist, Rousey is best known for her time in UFC and the WWE. She is the first American woman to earn an Olympic medal in Judo by getting a bronze medal in 2008.

After that, she took some time off and started pursuing her career as Mixed Martial Artist, and later on, she also won her debut in MMA. She is an inspiration for all the upcoming generation as she has done well in all her career and still now giving her best.

Becky Lynch is an actress and professional wrestler, she performs under the Raw Brand, and also she is the current Raw women’s championship in her second region. She began her wrestling training in the year 2002 and she started working hard and passionately. Due to which she is the first one in the top ten list who have gained many awards and title.

Bhuvneshwar Kumar shared the first picture of his daughter, was seen holding his daughter in his lap