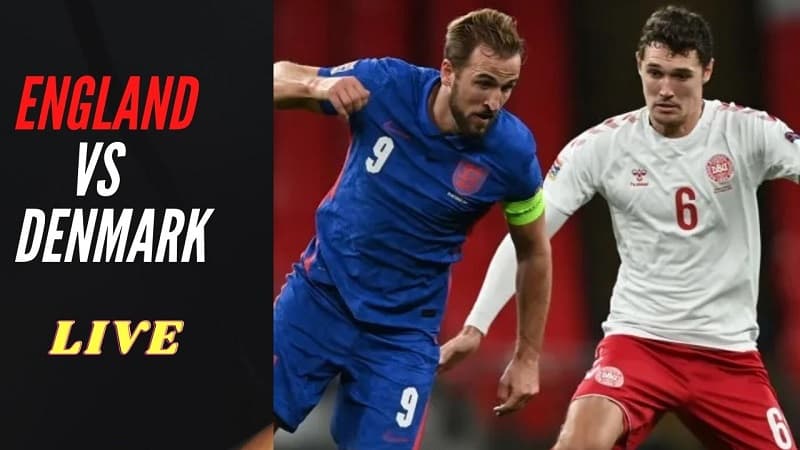 UEFA European Football Championship is the men’s football championship of Europe which is organized by the Union Of Europe Football Championship. The tournament is being held in 11 countries. Due to COVID-19 the pandemic situation 2020 matches have been postponed and reschedule from 11 June to 11th July. Check Where to Watch England vs Denmark Live Stream: UEFA euro 2020.

England is all set for their semi-finals of the European championship it is going to take place on 7th July in London the team is back with a victory they have been in a good shape as they are playing strongly in their past matches. Whereas Denmark for the first time they have reached till European Championship since after winning the competition back in 1992. So now let’s check the complete details about vs Denmark Live Stream in India, the Predicted lineup, Head Head record, match Schedule.

Where to Watch England vs Denmark Live Stream in India?

All the Indian fans can watch UEFA Euro; England vs Denmark on the Sony Sports network it will be live telecast on the official channel. The timing for England vs Denmark match will be at 9:30 IST, The same broadcast is going to be done in Hindi channels like SONY TEN2 and SONY TEN3. Also if you miss out on the broadcast on the channel you can catch the live streaming on the official app or website of the Sonyliv app which you can download from the google play store all you need to do is a small subscription. Also, Airtel subscribers can watch the live matches on Airtel Xstream.

Predicted line up and Head to Head record

The England Manager has shared; “We’ve got a fabulous opportunity. It’s a chance to make history as we’ve never been to a European Championship final. It’s not so much pressure for this team. It is another challenge that they’ve got the chance to take on, and at the moment they’re rising to those challenges. We had two games with Denmark in the autumn. I knew what a good side they were before and they’ve proved that again in this tournament. It is going to be a fantastic game to be part of.”

England Captain; “Denmark is a great team. We played them in the Nations League twice last year, and we didn’t win one game – one draw, one loss. But we need to try to focus on ourselves; it is a semi-final at our national stadium and we’ve got to use all those positives to worry about ourselves. We know if we get it right and play how we know we can then we have a great opportunity to get to a final. It’s going to be incredible.”

Denmark Coach; “It’ll be like playing an away game, but that also has its own charm, so we’re actually looking forward to it. We’re happy that people will be there and that the fans are back in the stadium, though obviously, we would have loved it if half the stadium was dressed in Danish colors. Our motivation is to silence the spectators, but we know it’s going to be difficult.”

Denmark midfielder; “At the start of the tournament, we gave ourselves the goal of coming back to Wembley. With everything that we’ve been through, it’s always been our No1 goal. Now we are ready for Wembley so, in terms of feelings, it has been crazy.”

What time is England vs Denmark?

England vs Denmark game is played on Wednesday 8 July and kicks off at 12.30 AM IST at Wembley Stadium