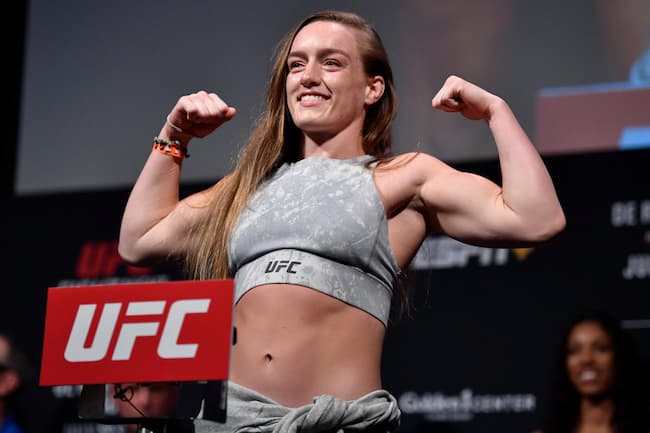 Aspen Ladd is one of the top women’s bantamweight fighters in the UFC. Aspen. The fighter is a rising star and is a favorite to be the champion in the coming years. She is chasing the gold and has said that she wants to be the featherweight champion. Check UFC Fighter Aspen Ladd Net Worth.

Aspen Ladd was born in Folsom, California, United States on March 1, 1995. The fighter stands at a height of 5 ft 6 in and walks around weighing 137 lb.

Ladd has fought in the flyweight and the bantamweight division previously. She ranks 3rd in the UFC women’s bantamweight rankings.

Check out information on her Net Worth, UFC Record, Boyfriend, Coach on this page.

After having competed in 9 fights as an amateur mixed martial artist, Aspen Ladd made her professional MMA debut on the 27th of February, 2015, against Ana Carolina Vidal.

Ladd knocked out Vidal in the very first round of the fight to kickstart her career with a bang. In two years’ time, Ladd was 5-0 up in her professional MMA career.

Ladd then moved to the UFC and made her debut at UFC Fight Night: Cerrone vs Till. She took on Lina Lansberg and earned a second-round TKO win.

At UFC 229, Ladd knocked out Tonya Evinger in the first round, winning the Performance of the Night as well.

She headlined her first event, at UFC Fight Night: de Randamie vs Ladd, but was knocked out in just 16 seconds – her first loss in her MMA career.

Aspen Ladd’s net worth is estimated to be around $500 – $1 million. This number is bound to increase in the upcoming years given she is a top-ranked fighter and one of the favorites to become the bantamweight champion. Aspen is also only 26 years old and has a lot of fights left in her.

Aspen has accumulated a total of $313, 397 in career earnings. The fighter has managed to bag two bonuses in her little time in the UFC so far. The biggest pay Aspen has received comes from UFC Fight Night: Dos Anjos vs Lee in 2019.

The fighter took home a check of $81,500 after her win against Sijara Eubanks. At UFC 229: Khabib vs McGregor, she won the performance of the night bonus. Her last fight against Yana Kunitskaya earned her a total of $74,000. The fighter was also sponsored by Reebok for a brief time.

Aspen went to college at Folsom Lake College but later ended her education to focus on her Martial Arts career. Ladd is not yet married but is dating her coach, Jim West.

The two have never shied away from showing affection publicly and look to continue keeping their personal life open to the public. Jim always comes in support of his girlfriend and has her back during the tough times.