We Are All One: How The Time Has Come For Tamil Nadu To Embrace Chess 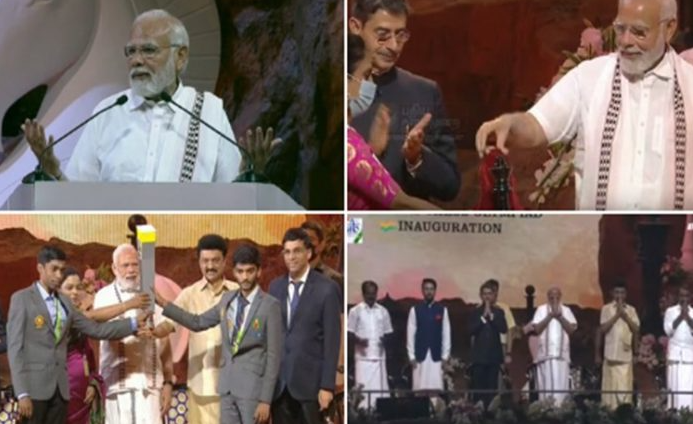 We Are All One: How The Time Has Come For Tamil Nadu To Embrace Chess

We Are All One: How The Time Has Come: The 44th FIDE Chess Olympiad opening ceremony was held showcasing the best in competitive chess and featured talks by Prime Minister Modi as they welcomed key players from all over the world.

The Olympiad, the biggest international chess tournament in the world, is taking place at Hotel Four Points by Sheraton, Mamallapuram. This event is scheduled to conclude on August 10. It has not been held in India before and Russia was the host country until recent events during the Russia-Ukraina crisis caused it to move out of Moscow.

Prime Minister Modi showed his thanks for the timing of the FIDE Chess Olympiad and congratulated India’s best talent for their success. The event was also attended by Union Minister Anurag Thakur, Union Minister L. Murugan, and Tamil Nadu Governor Ravi.

Prime Minister Narendra Modi said this is the first time the Chess Olympiad is being held in India and it is coming to Asia for the first time in 3 decades. He added that Tamil Nadu has strong historical connections with chess.

The Prime Minister of India discusses the story and significance of the Temple at Sathuranga Vallabanathar, an ancient site in Saivya Karnataka. He declared the 44th Chess Olympiad open.

M.K. Stalin, Tamil Nadu Chief Minister, addressed the inauguration of the 44th Chess Olympiad by saying tourism and industry will thrive in the state because of the event. He also held a moment to honour PM Narendra Modi’s love of chess. As Chief Minister of Gujarat, Modi held a grand chess event with tens of thousands playing at once.

Stalin said that 36% of Indian Grandmasters are from Tamil Nadu.

“It was a moment to see the diversity of the cultures of India represented on stage today,” remarked President of FIDE, Arkady Dvorkovich.

India has successfully hosted the Under-17 Men’s World Chess championship. Anurag Thakur, India’s Union Minister for Information and Broadcasting, attributed this success to nurturing talent in all corners of the country. Mr Thakur also highlighted that India is hosting the Under-17 Women’s World Chess Championship later this year.

Sports Minister Vijay Goel stated that it was a proud moment when the first ever international torch relay was launched successfully by Prime Minister Narendra Modi in Delhi. Mr Thakur informed he was happy to announce that the government wanted to bring the very best talents from India and provide training for our sporting athletes on an international level, as well as promote traditional games on the global stage through conscious initiatives, and had long-term plans for the trajectory of sports in India.

Paris Olympics: All The Latest Info You Need To Know