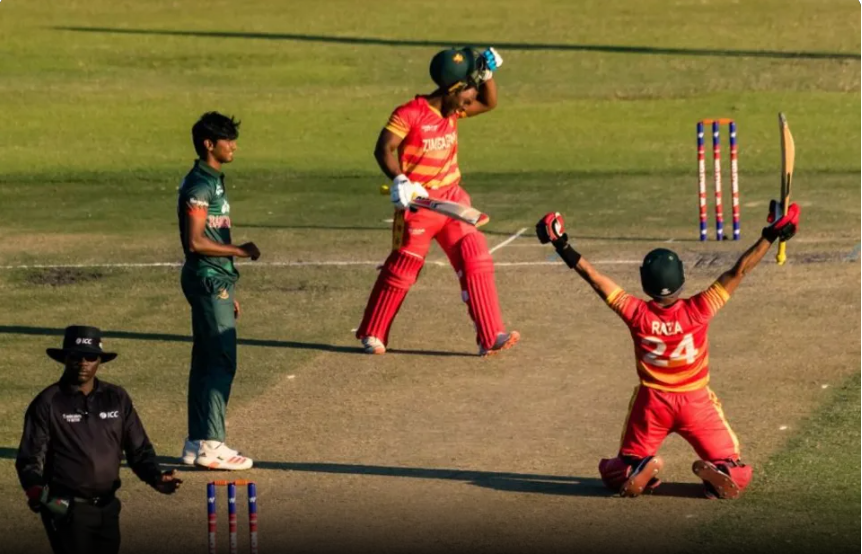 Zimbabwe seal series win after thrilling Africa-wide comeback: Zimbabwe won their first ODI series against a major team in 5 years, with Sikandar Raza’s second successive ton and Regis Chakabva’s century. Raza was the key to restricting Bangladesh with 3 for 56 which led to a 290-9 score, and Raza’s calculated approach helped in the chase by taking spectacular shots throughout.

In the first ODI, Raza helped to script a challenging chase as he and Innocent Kaia added 192 runs for the fourth wicket. Two days later in the second ODI, Raza met up with Chakabva as Zimbabwe chased down 300 from 49 for 4. They scored 201 runs to reach victory. The three 200-plus stands that Raza has been involved with have brought about two victories for Zimbabwe.

In the last over of Zimbabwe’s innings, Tony Munyonga hit 4 sixes and 2 fours helping them close on 45 with 14 balls to spare. At one point, he was dropped twice in a row but had his own way in the 47th over.

Though Zimbabwe began their 291-run chase worse than they did in the first ODI after losing Matt Sayers early and Takudzwanashe Kaitano and Kaia Zimmerman caught not long into the first 3 overs, they improved in the middle. Wessly Madhevere was lbw to Mehidy Hasan Miraz before Tadiwanhes Marumani was caught by Taijul Islam in a catch that put them 49 for 4.

Even with the required rate hovering around 7.5, Raza was so dominant in his personal performance and did not allow Bangladesh one wicket till the 24th over, Mahmud being their best bowler till then.

Shoriful Islam was caught next. However, Bangladesh missed a run-out opportunity after the bowler Mehidy Hasan Miraz failed to connect with the ball at the striker’s end. There was a huge cheer when Raza walked back to the crease upon learning that he was not out.

Rather than feeling hampered by the previous runout scare, Raza and Chakabva followed up those three sixes with a three four-ball over that knocked out Taskin Ahmed. Then in the same over, Chakabva brought some crowd support when he smashed Taskin Ahmed for four consecutive fours.

Raza was tense with anticipation throughout the innings, and following his 21st birthday run, he became relieved. He smashed two sixes over midwicket in his 43rd ODI century to reach an individual hundred.

Zimbabwe was dominant throughout the game, keeping Bangladesh from scoring 300 despite an effective first, third, and fifth powerplay. Captain Tamim Iqbal struck ten fours and a six in just 45 off 50 balls while batting.

Bangladesh’s innings slowed down due to Tamim Iqbal’s dismissal. Despite a 50-run third-wicket partnership between Mushfiqur Rahim and Najmul Hossain Shanto, the Bangladesh batsmen only managed a rate of around 5.5 runs per over. Mahmudullah’s 82-run fifth wicket partnership with Afif Hossain helped recover the pace of the innings, but they had to avoid big risks due to a lack of quality in Bangladesh’s low order and other weakness

Bangladesh managed to score 84 runs in the last 10 overs of their innings, but it was less than they would have scored in the same phase of an ODI. The batsmen were more attuned to keeping the scoreboard ticking over in the last few overs.

Zimbabwe’s kitty of offspinners gave them silver lining after silver lining as Luke Jeongwe and Brad Evans conceded five crucial wickets on the field. Raza and Chakabva helped themselves with three apiece, while Victor Nyauchi and Tanaka Chivanga soldiered on fairly well.

Regis Chakabva: The Man Who Changed Life As We Know It