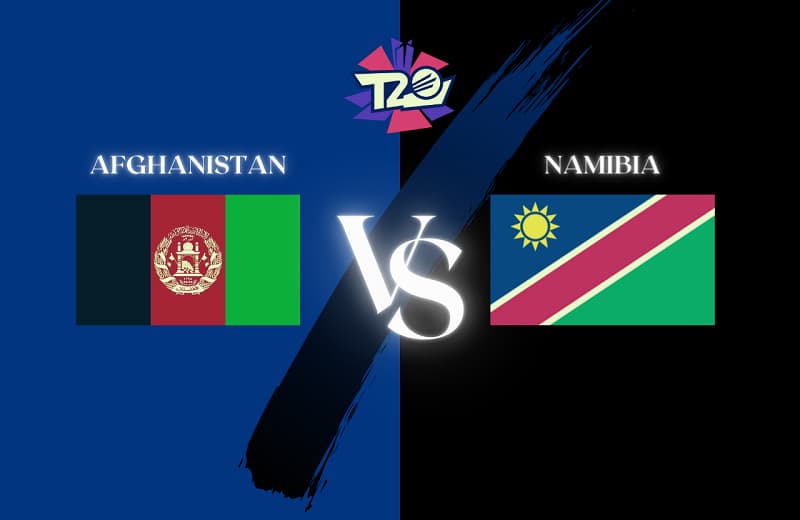 ICC T20 world cup start on 14 Oct and now the 27th match of the world cup is between Afghanistan vs Namibia. In the points table, they both are higher than Indian Team. CHeck Afghanistan Vs Namibia 27th Match Live Coverage Details, Where To Watch, Team Squads, Previous Stats Of Both Teams.

In Group 2 Scotland is in the last position and India is in the second last, On another hand after defeating a stronger team like IND and NZ Pakistan is on top.

In this article, you get to know about the squad, live coverage information regarding this match.

Stats of AFG vs NA

The winning % in this match goes in favor of Afghanistan, Pitch is supportive of bowlers who choose in the first phase.

The team that chooses to bat first doesn’t win more matches in comparison to the team who chooses batting in the second phase of the match.

According to this toss play a key role in deciding the winner of this match.

No doubt Afghanistan is playing pretty well in this tournament and giving the tight fight to the opponent team.

Afghanistan is in the second position with 2 points and +3.092 NRR

After that New Zealand then India and at last Scotland

Star sports is the official broadcaster of this ICC T20 world cup, so if you want to watch AFG vs NA match.

The 27th match of this world cup will be telecast on Star Sports Network, Live streaming of this match is available on Disney+ Hotstar.

Squads of Afghanistan vs Namibia

For more updates stay connected with SportsUnfold, we are trying to fetch more information regarding this match.