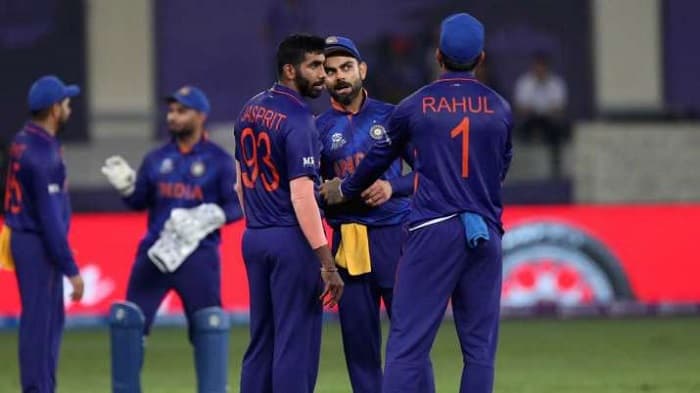 India vs New Zealand is going to play its second match against each other on 31st Oct. Check ICC T20 World Cup 2021 Live in the USA And Canada, Where To Watch?

There is a total of 45 matches that are going to play in this tournament. In which India loss its first match against Pakistan.

On 31st Oct they are going to play its second match against NZ it does or die match for both teams so let’s see their old stats H2H records etc.

Team Blue and Kiwi next match is important for both teams, to reach the Quarterfinal round. Pakistan After defeating these two teams Pak is on top of the points table.

According to assumptions if the Indian team beats NZ then the Kiwi team get4 points and on the other hand winner team gets 6 points.

It is just an assumption that India will manage to beat Afghanistan, Namibia, and Scotland in further upcoming matches.

H2H matches of both teams

It’s not easy for team Blue to easily beat NZ and take place in the quarterfinal, Pitch of UAE supports bowlers so Toss places a key role in the match.

On other hand, the Indian team is in a higher position than NZ in ICC ranking.

If we see stats between these two teams then Team Blue is not in good condition.

In T20 format both teams play 16 matches where NZ win 8 and India win 6, 2 matches are tied in these two teams.

At last in the 2021 test championship, NZ beat India with 8 wickets.

Live streaming and TV broadcast in USA and Canada

In ICC tournament Star Sports is broadcasting all matches, but if you are a cricket fan from the USA then you must watch it on ESPN+ which is available in English or in Hindi.

Disney Bundle is available for Cricket fans of the USA and Canada.