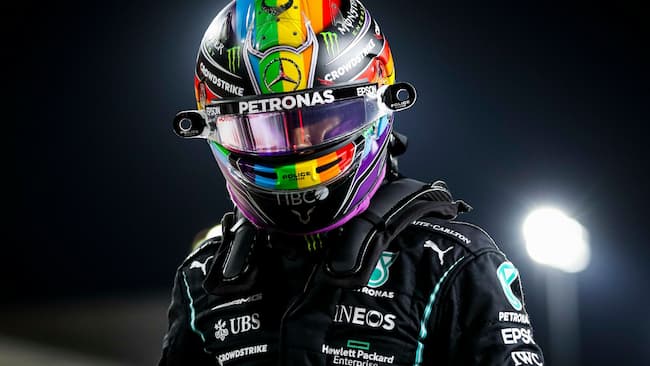 Lewis Hamilton was born on 7 January 1985 in Stevenage, England. He is a seven-time world champion and is the most successful driver. With more than 100 wins and pole positions, he is at the pinnacle of Formula 1. At the tender age of eight, Lewis sat in a kart for the first time. He was immediately bitten by the racing bug. Check Lewis Hamilton’s Helmet.

In 2020, his career reached new heights, breaking numerous records in a challenging season having various calendar changes. During the course of the year, Lewis surpassed Michael Schumacher’s record of F1 race wins. At the Turkish Grand Prix, he matched Michael’s record of world titles with his seventh Drivers’ Championship.

In 2021, in an immense fight for the world championship, he narrowly missed out on an unprecedented 8th world title after Max Verstappen passed him on the last lap of the last race in an epic title fight. Despite the heartbreaking loss, he showed immense strength and gratitude by maintaining his composure on the podium. He congratulated Max and the Red bull team for their win.

Everything that Lewis does becomes an important part of his identity. He has been one of the drivers who have been vocal. Lewis has expressed his opinions on any topic which he feels towards. A crucial part of his character is the helmet.

Check out the different things about his helmets.

For nearly 70 years Bell has been at the forefront of professional motorsport in both four and two-wheel categories. Over half of the Formula 1 drivers, including Lewis Hamilton wear lids designed and manufactured by Bell Helmets.

Hamilton has long had a “gentleman’s agreement” with the Japanese company Arai. It supplies free helmets and services to F1 drivers but has a policy of not paying them a fee on top. Drivers usually take into account the aerodynamic properties of helmets – they are part of the complex interaction between the windscreen and the airbox

The back of Hamilton’s helmet reads the quote, “We stand together”, and the sides have, ‘love is love’ written on it. He has used various kinds of helmets for different races. Lewis Hamilton sported a rainbow-colored helmet during the ongoing Qatar Grand Prix weekend at the Losail circuit.

Hamilton wore an LGBTQ flag on his helmet which included black and brown stripes to honor queer communities of color. This includes the light blue and pink colors in honor of the transgender community. He also had a one-off helmet for his home Grand Prix at Silverstone.

The one-off helmet keeps a similar color scheme to Hamilton’s traditional purple helmet design but includes messages on sustainability and racial equality, as well as featuring corner names from the Silverstone Circuit.