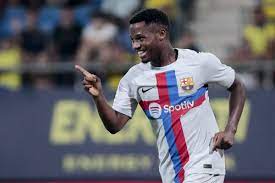 Ansu Fati, a winger for Barcelona, has faced more difficult football decisions during his career than others. Fati, who made his Barcelona debut at age 16 and was a member of Spain’s World Cup team in Qatar, had the potential to play for Real Madrid at the club level and for Guinea-Bissau at the international level.

As soon as he could walk as a three-year-old in Guinea-Bissau, Fati began playing football. He recalled his mother calling him in for supper and seeing him playing barefoot in the street.

“Those with a bit more disposable income wore plastic sandals. We took some socks and formed a ball by rolling them up together before taking off! We sometimes recovered a rubber ball, but every time we tried to kick it with a pointed object, it broke,” Fati stated in an interview with France Football.

Fati traveled to Seville aboard an airliner in 2009. His father was trying to make a life in Spain and had eventually succeeded in moving the family there, despite the fact that he had never seen him and had only sometimes spoken to him on the phone.

Once in Spain, Fati’s ability to play professional football became obvious. Real Madrid and Barcelona were among the clubs who soon came knocking. However, Fati and his family opted for Barcelona over Madrid.

“I tried out for Real Madrid before signing with Barça. The team didn’t have a house for its young players at the time. Therefore, my father and I determined that La Masia at Barca was the best choice.

A debut shortly after. Leo Messi then unexpectedly catapulted to fame after posting a photo to his Instagram account. A call up to Spain came a few years later.

At Barcelona, Fati has had difficulty getting game time. The winger is a crucial component of the team, according to coach Xavi. Also unsuccessful for him was the World Cup. A Moroccan squad who performed better than everyone anticipated eliminated Spain in the quarterfinals.

Tottenham, according to Conte, will use possibilities to bolster the team