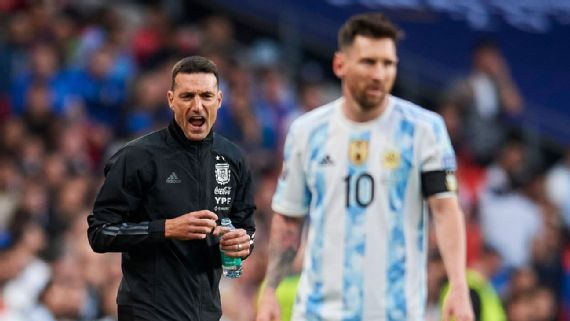 Argentina’s ‘Scaloneta’ has given Lionel Messi and Co. the foundation for World Cup glory. Albiceleste, who have not lost a match in over two years, will face Honduras and Jamaica in a forthcoming friendly, and the team will not make many changes to the roster.

Furthermore, there is no need for there to be.

Since losing to Brazil in the 2019 Copa America semifinals, Lionel Scaloni’s team has won every game.

They won the 2021 Copa for the first senior title since 1993, qualified quickly for the 2022 World Cup, and beat the European champions Italy in a showcase match at Wembley in June.

Something like this would be spectacular under any conditions. However, remembering two things at once is so unusual that it borders on the unbelievable.

To begin, Argentina’s performance at the 2018 World Cup in Russia was a complete and utter disaster. Second, rookie coach Scaloni was appointed as a stop-gap caretaker primarily because he met the sole criterion at the time: he wasn’t a huge financial risk.

The Argentines call his squad “the Scaloneta” (his house) because of this.

Argentina gambled for the long haul on the charismatic Jorge Sampaoli. The catastrophe was predictable and preventable.

To play Sampaoli’s style, Argentina lacked the necessary nimble defenders and ball-playing goalkeepers. The veteran group hobbled out of Russia, where they were on the verge of being knocked out in the opening round.

Sampaoli was fired and given a massive severance package. Scaloni was brought in because financial resources were inadequate. The caretaker’s talk was not in his vocabulary.

He concluded that France and Croatia, the two teams that would ultimately win the World Cup, “robbed the ball and were in a position to fire in 3 or 4 seconds” after the tournament in Russia.

“This is the future of the game, my preferred style of football, and the right time for its introduction in Argentina. Our approach is going to be more vertical and direct.”

It was clear that this strategy was flawed. It’s not a style of play that complements Lionel Messi’s strengths. The beginning wasn’t very good. Their 2019 Copa America opening against Colombia was Scaloni’s debut in a competitive competition.

Argentina’s defence was stretched thin and they could score only two goals. Argentina tried to inch closer to a more practical playing concept for the rest of the game.

When they lost to Brazil in the semi-finals, they played well. However, they were top heavy with Messi and two forwards (Lautaro Martinez and Sergio Aguero), making them vulnerable to counterattacks.

However, Messi was obviously on board. For the first time in his professional career, representing his country as a player became his priority.

He seemed distant and content in his world for his Argentina team, and they had a hard time connecting with him.

By the end of the season, he had become a more outspoken and upbeat team member, fully integrated for the first time. Argentina was not as vertical and direct as they once were by the time World Cup qualifying games rolled around.

A trio of Leandro Paredes, Rodrigo De Paul, and Giovani Lo Celso in the midfield allowed them to control the game’s tempo and find Messi in a scoring position.

This has been Argentina’s most consistent team strategy throughout Messi’s extensive international career. They’re a treat to see when they’re on, especially when the game opens up as it did in the second half against Italy at Wembley in June.

One of the biggest issues has always been on the defensive. Indeed, this was the case in Russia four years ago, which will undoubtedly be true in Qatar.

But since goalkeeper Emiliano Martinez and central defender Cristian Romero joined the team in June of last year, the team’s confidence has skyrocketed. Numbers like that are undeniably mind-blowing. Argentina has allowed just two goals in their last twelve games.

To see those numbers get worse when Honduras plays in Miami on September 23 and Jamaica plays in New Jersey four days later would be somewhat unexpected.

That, however, is beside the issue. These games are merely about getting the team back together and ironing out any kinks.

For example, it will be interesting to see if Brighton’s Alexis Mac Allister is given another chance in the deeper midfield role he played in the last game, a friendly against Estonia back in June.

If Argentina loses any of these FIFA dates, it won’t be because of a lack of confidence in Scaloni’s plan or the team’s ability to win the World Cup.

As an illustration of why a losing streak is necessary, Scaloni points to Italy, whose extended unbeaten run was insufficient to get them to Qatar. In a hypothetical scenario, on December 18, Scaloni must decide between a long undefeated streak and winning the World Cup. Perhaps he will be granted both.