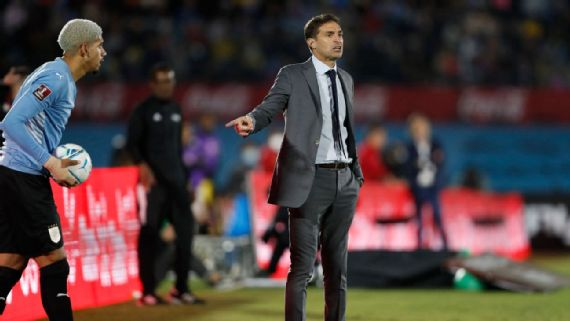 Do Edinson Cavani and Luis Suarez work together? Don’t forget about Darwin Nunez. Uruguay has many questions about the World Cup. Most managers only go through the motions on these final FIFA dates before World Cup rosters are revealed.

They used the opportunity to bring the group together and explore peripheral alternatives since the game plan for Qatar is set in stone.

The South Americans, in particular, should take this to heart.

Two copies of Copa America and eighteen World Cup qualifiers since the middle of 2019 should have been enough to get their team in condition for the big tournament. Brazil, Argentina, and Ecuador are all excellent examples of this.

But Uruguay is not included in this rule. It wasn’t until the year’s end that Diego Alonso was named the team’s new head coach.

Uruguay’s upcoming friendly against Iran and Canada is intriguing due to his pending heavy workload and consequential decisions.

After Oscar Washington Tabarez’s historic 15-year tenure as coach, Uruguay’s return to the top table of world soccer was facilitated by the steady hand of a new manager Fernando Alonso.

In retrospect, it seems preferable that Tabaez stood down after Russia in 2018. But it’s simple to see why he was tempted to stay.

The journey to Qatar would coincide with the coming of age of the team’s young, promising midfielders, Federico Valverde and Rodrigo Bentancur.

It would be the swan song for the team’s experienced stalwarts, including Luis Suarez, Edinson Cavani, Diego Godin, Fernando Muslera, and Martin Caceres.

It was fantastic on paper. There were issues on the playing field.

This problem stumped Tabarez, and now Alonso must figure out how to solve it. If all of the veterans were to be put into the field, how many would there be?

Tabarez was ultimately undone by a confluence of injuries and a grueling schedule and never found an answer.

Until they were scheduled to play Argentina at home and away, Brazil on the road, and Bolivia at the high altitude of La Paz, Uruguay appeared to be on track for Qatar. It took four losses, three of which were significant, to prompt action.

The schedule was kind to Alonso, who helped Uruguay qualify for the World Cup by beating Paraguay, Venezuela, and Peru. South Korea, Portugal, and Ghana will be considerably tougher opponents in Qatar.

Alonso knows that the World Cup team he sends out will be different from the one he used to qualify for the tournament. The upcoming days should help him better understand these distinctions.

Godin, the Uruguayan team’s captain, leader, and central defender, has been sidelined by an injury and will miss the matches this month. Before this season, Alonso watched out for Godin’s safety on the field. Do they even have to pick him?

Ronald Araujo, a defender for Barcelona, may be shifted from right back to his preferred central position. It would be intriguing to see Araujo team up with Jose Maria Gimenez.

Due to his injury, Gimenez will miss these two games, so Alonso will get to give senior center-back Araujo more defensive responsibilities. Godin will go to the World Cup if he can play at that level while still being healthy. However, it could serve well as a secondary option.

Who will be the goalie, if anyone? Muslera suffered an early-year injury, and Argentinean Sergio Rochet stepped in.

He’s a solid option between the pipes. However, his stiff demeanor prevents him from reaching the highest success levels. Does Alonso stick with Rochet and not recall Muslera?

On the defensive end, Cavani has left off the team. He’s been given time to get back into game shape at Valencia, and he’ll almost certainly be able to make it to the World Cup.

However, in what capacity? It’s becoming clear that Uruguay can’t start both Cavani and Suarez; one of them will have to sit on the bench.

What about Darwin Nunez, though? Is he able to play with one of the seasoned players? Can Uruguay benefit from keeping the 4-4-2 formation?

Some believe that Uruguay’s midfielders, the team’s strength right now, would be more effective if they played in a different formation that featured three players in the middle of the field and a lone winger who could stretch the field.

Uruguay has a lot of important decisions to make with just two months till the big kick-off, including players but also the team’s form and the entire concept. Preseason contests versus Iran and Canada have rarely held as much significance.