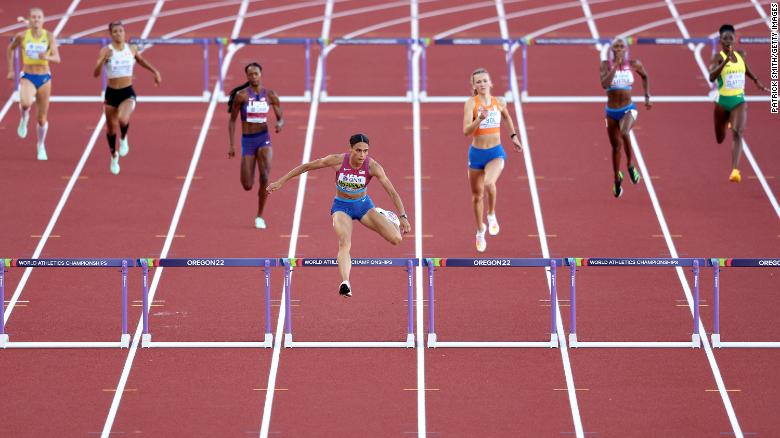 She broke the previous record she had established at the US Championships last month, clocking in at 50.68 seconds instead of 51.41.

McLaughlin outran her rivals to seize the lead quickly, defeating Dutch runner Femke Bol and former world champion Dalilah Muhammad, who finished in second and third place with times of 52.27 and 53.13 respectively.

McLaughlin’s outstanding effort culminated a year of record-breaking runs for the American.

According to the World Athletics website, she ran an astounding 51.90 seconds in the 400-meter hurdles at the US Olympic Trials last summer.

At the Tokyo 2020 Olympics, McLaughlin ran in 51.46 seconds to win gold and set a new world mark.

As the first woman to complete the 400-meter hurdle race in under 51 seconds, McLaughlin made history.

According to the World Athletics website, she declared after the race, “The time is really incredible and the sport is becoming quicker and faster.” “merely determining what obstacles can be removed. From here, I just grow faster.

I followed Bobby’s (her coach Kersee’s) instructions and finished the race. Coming home, I was certain that we could accomplish our goal if we just maintained our stride pattern and tempo.

There is no denying that the 400-meter hurdles are becoming more and more competitive. We have a large number of females who are ready to challenge our bodies, and the times are becoming faster “Added McLaughlin.

Olympic bronze winner Bol said: “Sydney is just really powerful. I ran against the greatest in the world.

She was in front of me at the finish line, so even though it felt great, I wasn’t sure whether I had raced a strong race. I was amazed to be a part of it and to finish second in such a race when I saw the time afterwards, Bol continued.

In the same competition in Tokyo 2020, Muhammad took home a silver medal. She experienced “mixed feelings” in relation to her performance.

“Although it’s lovely to receive a medal, I went into these events knowing that, despite any illnesses, I had always placed first. But you’re always looking for more as a competitor.”