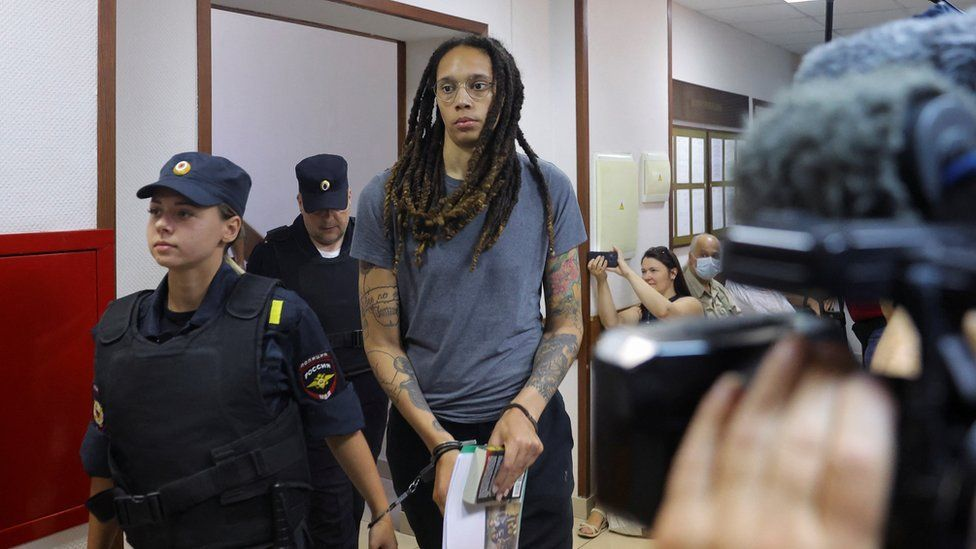 Brittney Griner: The USA urges Russia to accept the deal to free jailed basketball star. The double Olympic winner was accused and convicted of possessing drugs. She was accused of smuggling drugs after admitting to possessing cannabis oil.

White House national security spokesman John Kirby said in a statement that the USA offer was “a serious proposal”. Kirby did not provide or reveal any further details.

Viktor Bout (merchant of death) has been serving a 25-year prison sentence in the USA.

Brittney Griner is said to be transferred by Washington to the Russian authorities in exchange for Griner and former US Marine Paul Whelan, the reports claim.

Whelan was sentenced to 16 years in jail in Russia in 2020. He was accused of spying. He was said to have USA, British, Canadian, and Irish passports.

Mr. Kirby interacted with the reporters and revealed that the duo was being wrongfully detained and needed to be let go.

On the topic of the USA proposal, Mr. Kirby stated: “We urge them to accept it. They should have accepted it weeks ago when we first made it.”

But according to the Reuters news agency, one unconvincing block is that Russia is ready to add convicted murderer Vadim Krasikov to the proposed swap. Vadim Krasikov is in prison in Germany,

When questioned about this rumor, Mr. Kirby dismissed it, saying: “I don’t think we go so far as to even call it a counter-offer.”

Griner, 31, admitted to the court she made an “honest mistake”. She said that she had no intention to break the law.

She belongs to the group of the best female players in the world. She was taken into custody in February at an airport near Moscow. Vape cartridges consisting of cannabis oil were found in her luggage. She visited Russia to play club basketball during the US off-season.

Russia soon went on with its invasion of Ukraine. In that scenario, her case became a subject of high-profile diplomacy between the US and Russia.

Her defense team said they would go on to appeal against the verdict.

Griner’s Phoenix Mercury teammates showcased a gesture of solidarity and observed 42 seconds of silence before the game, in honor of her number 42 jersey.

US President Joe Biden marked her sentencing “unacceptable”. He added: “I call on Russia to release her immediately, so she can be with her wife, loved ones, friends, and teammates.”

On the other hand, Secretary of State Antony Blinken stated: “Russia, and any country engaging in wrongful detention, represents a threat to the safety of everyone traveling, working, and living abroad.”

Mr. Blinken discussed the issue in a phone call with Mr. Lavrov. This was the first conversation between the two men since the start of the war in Ukraine.

A day after Griner’s sentencing, Mr. Lavrov revealed that Moscow is ready to discuss the topic of prisoner exchanges with Washington. But he kept a condition that this should be within the framework of an existing diplomatic channel agreed upon by Presidents Putin and Biden.

Both Mr. Lavrov and Mr. Blinken are present in Cambodia to attend a meeting of the Association of South-East Asian Nations. The USA says that Mr. Blinken will attempt to speak with Mr. Lavrov again while they are there.