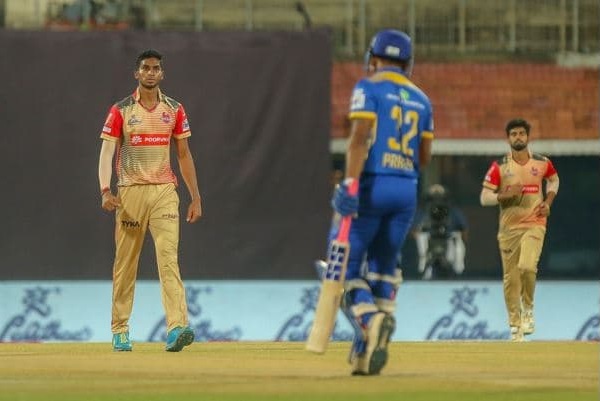 The left-arm spinner, among a clutch of Tamil Nadu players featuring in the Indian Premier League, claimed four wickets for 20 runs to help the defending champions to restrict Madurai to a low score of 124-9 in 20 overs. The Chepauk batsmen led by their captain Kaushik Gandhi (64 off 50 balls, 6 fours, 1 six) then attained the target in 18.5 overs, as they finished on 125-5. Chepauk rose to the second spot (7 points from 5 matches) with this victory, closely behind leaders Ruby Trichy Warriors (8 points from 6 matches) and ahead of

Kaushik felt that with the start provided by Siddharth they should have restricted Madurai to a lower score. “We started very well with the ball. It was a good toss to lose because the wicket didn’t play the way we expected it to. But having said that we could have finished better and got them all out for about 90-100, so it was 20 runs extra with the ball,” he said.

The 23-year-old Siddharth, who plays for Delhi Capitals, opened the bowling attack and picked a wicket in each of his four overs to derail the Madurai innings. It was also his best bowling performance in the tournament surpassing his earlier best of 2-12 against Tuti Patriots in 2019. Siddharth was elated that he could turn in a good display for his team. “I knew before the game that I would be

bowling with the new ball. I wanted to give a good start to the team and I’m happy I did that. I wanted to hit the right lengths and I thought there was some assistance from the wicket. It was a bit slow so I wanted to keep it tight and not try anything extra,” he said.

Madurai captain NS Chaturvedi, who bucked the trend of teams batting second after winning the toss (14 consecutive matches) by deciding to bat first, justified his decision by single-handedly taking on the Chepauk attack. The 31-year-old struck a superb 70 off 50 balls (9 fours, 1 six) to give some respectability to the total.

All-rounder Sonu Yadav (2-18), who took a fantastic running catch to send back Jagatheesan Kousik (10), bowled an excellent final over conceding two runs and claimed three wickets, including a runout to compound Madurai’s troubles. Chaturvedi admitted poor batting in the powerplay let the side down. “The way we started in the powerplay was

very bad, we did not apply ourselves. We got out to the longer boundary, trying to take on the bowlers. That was not part of the plan and we failed there,” he said.

The Madurai captain, who did not take the field during the Chepauk innings, revealed it was due to dehydration. “I was severely dehydrated and I had some giddiness so after assessment from the doctors they advised me to stay inside. But I will be available for the next game,” he said.

Upstox Most Valuable Player of the Match: Kaushik Gandhi (CSG)