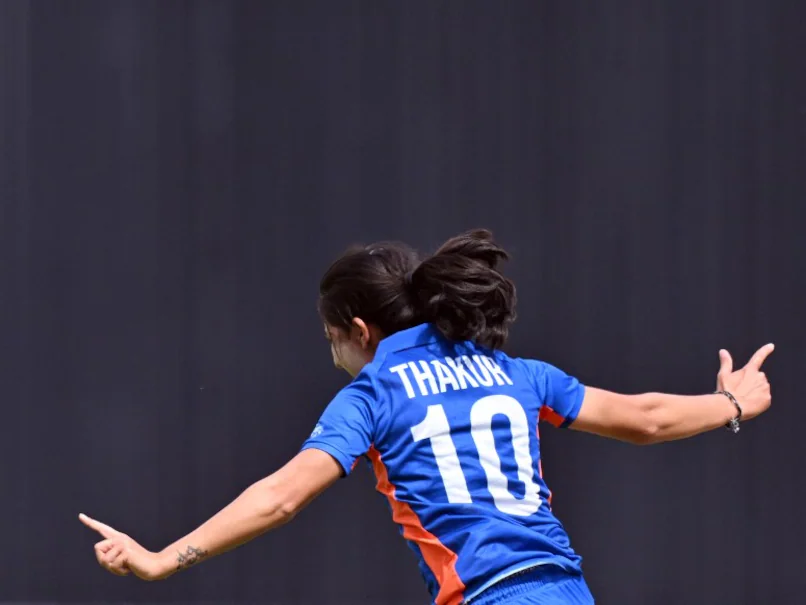 CWG 2022 India Women vs Barbados Women Highlights: India overcame Barbados by an innings and a wicket in the Group A match at Edgbaston in Birmingham to advance to the semi-finals of the Commonwealth Games cricket.

Barbados was restricted to 62-8 in 20 overs while chasing 163. An unbroken 56 from Jemimah Rodrigues helped India to a total of 162 for four against Barbados in a women’s cricket Group A match at Edgbaston Cricket Ground.

India was reduced to 92 for four after Harmanpreet Kaur was bowled for a duck. In the fifth wicket partnership of Jemimah and Deepti Sharma (34), India reached the 160-run mark. Toss winner Barbados chose to bowl first against India.

The Harmanpreet Kaur-led team is playing for its life tonight, as a loss will see them eliminated from the competition after the group round. It took India a win over Pakistan to get their campaign back on track after they narrowly fell short against Australia despite dominating the game for the duration of the time.

In the meantime, a victory for Barbados would advance the island nation and Group A champions Australia to the semifinals. Pakistan’s World Cup hopes have been dashed after losing three of their final four matches.

It’s not finished for me: Manika Batra vows to return…

Now then! All we have to show for this one-sided game is this. The two teams from Group A to advance to the next round are Australia Women and India Women. The focus now shifts to Group B, with South Africa Women taking on Sri Lanka Women on Thursday, August 4th. The game is scheduled to begin at 3.30 p.m. IST today (10 am GMT).

New Zealand Women face England Women in the second game of the day. As a result, the victor of the game would face either the team from India or the one from Australia in the other semi-final.

At 10.30 p.m. IST, the highly anticipated matchup between the women of New Zealand and the women of England will begin (5.00 pm GMT). Come early for the build-up, though. Cheers and goodbyes until then.

Barbados Women won the toss and elected to bat first, putting India Women in a commanding position. They were able to get rid of Smriti Mandhana with the ball, but they allowed critical partnerships to slip through their fingers cost them the game.

The Indian team’s two best results came from Shafali Verma with a 43 and Jemimah Rodrigues with a half-ton. Deepti Sharma’s cameo is a must-not-forget role. Her strike sent India Women past the 160-run barrier for the first time.

Renuka Singh’s dismissal of Deandra Dottin in the first over set the tone for the rest of the game for India Women. After then, she never looked back and went on to annihilate the Barbados Women’s World Cup team. As a result, she was able to post impressive statistics of 4 for 10 in just 4 overs during her time.

Five of Harmanpreet Kaur’s eight bowlers took wickets in the match. Barbados Women’s batters were never given a chance to settle in and form relationships. That they were able to achieve this in a game where it was either win or die tells much about their team.

Barbados Women’s batting has been atrocious once again. In spite of the daunting task ahead of them, they came out to bat without any purpose. Deandra Dottin was escorted back to the hut from the very beginning of the battle.

Despite a few nice shots, Hayley Matthews was unable to separate herself from her companion. At the end of the Powerplay, Barbados Women were reeling at 20 for 4 with the wickets falling at an alarming rate! Trishan Holder and Alisa Scantlebury did manage to hang in there, but they, too, succumbed to their wounds. Only two of their players had a batting average of more than ten.

That tells you all you need to know about their batting performance. Barbados Women had a rough day at the office today!

There was a raucous reception in Edgbaston after India Women won this game and advanced to the semi-finals! The Women in Blue continue to march on, while the Barbados Women’s mission comes to a close here in the United States. They’ve had a terrible time of it!