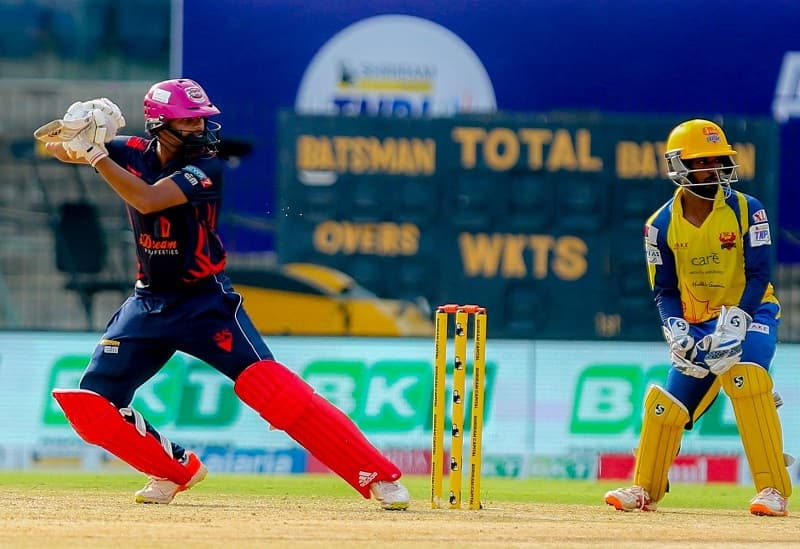 Chennai, August 7: Vivek Rajendran scripted a thrilling turnaround for Dindigul Dragons against iDream Tiruppur Tamizhans and helped them qualify for the Playoffs in the Shriram Capital Tamil Nadu Premier League at the MA Chidambaram Stadium here on Saturday.

The all-rounder smashed an unbeaten 57 runs off 28 balls (5 fours, 3 sixes) to help Dindigul get past Tiruppur’s target of 146 with three overs to spare. They finished on 147-4 to notch a six-wicket win that helped them end the league on a high. They finished with eight points from seven matches.

Chasing a tricky target, Dindigul were in trouble at 65-4 in the 10th over but Vivek in the company of Mokit Hariharan (21 not out off 20 balls, 1 four) took the rival attack to the sword with a 77-run unbroken partnership off 46 balls for the fifth wicket.

Vivek also achieved a rare hit, when one of his sixes struck the giant BKT Tire placed near the boundary.

Captain C Hari Nishaanth (33 off 25 balls, 1 four, 3 sixes) and Mani Bharathy (24 off 21 balls, 2 fours, 1 six) had set up things nicely with a 54-run alliance in 39 balls for the second wicket but pacer Alliraj Karippusamy put Tiruppur back in the contest by claiming two wickets in two overs.

However, the 30-year-old Vivek saved the blushes for Dindigul to thwart Tiruppur’s plans.

In fact, the all-rounder from Salem was confident of helping his team get through. “I told the team that I will score big and win the game today. I also said I will be Man of the Match,” he said, adding, “I didn’t think about much, just ensured that I stayed not out till the end and if that happened I knew we would win. I did that and that’s why we won with 3 overs to spare.”

Baafna, who was central to Tiruppur’s total, was also involved in a 49-run stand for the fourth wicket with all-rounder Francis Rokins (14 off 21 balls).

Upstox Most Valuable Player of the Match: R Suthesh (DD)

How to Watch The Hundred Mens Competition 2021 Live on TV and Online?