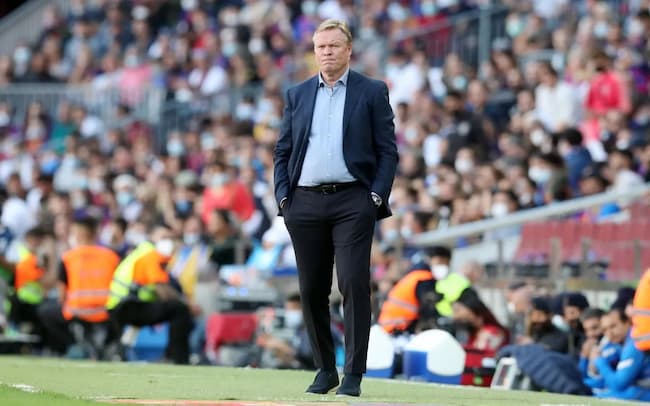 Ronald Koeman is a famous Soccer Player, who was born on March 21, 1963, in the Netherlands. Dutch soccer player and manager who is widely considered one of the finest attacking central defenders ever to play the game. Check Ronald Koeman Net Worth.

He won the La Liga title with Barcelona four consecutive years from 1991 to 1994 and scored the goal which won the club the European Cup title in 1992. He was part of the “Dream Team” of FC Barcelona. Koeman has been one of the few footballers to have played for the top 3 Dutch clubs: Ajax, PSV, Feyenoord. He also coached these Dutch clubs along with many European clubs all around d the world.

Check out the page for more information about his playing career, his stats, and his net worth.

Ronald Koeman is a Dutch retired footballer who was been manager of the FC Barcelona team before being sacked by the board. He is the younger brother of his former international teammate Erwin Koeman and the son of former Dutch international Martin Koeman.

Koeman could play both as a defender and as a midfielder; he frequently played as a sweeper, although he was equally known for his goalscoring, long-range shooting, and accuracy from free-kicks and penalties. He is the top-scoring defender in world football.

His older brother is fellow soccer manager Erwin Koeman, and his father is former player Martin Koeman. He married Martina Koeman in 1985 and has children named Debbie, Tim, and Ronald.

In April 1983, Koeman debuted for the Netherlands national team in a 3–0 friendly loss to Sweden in Utrecht. This match also marked the appearance of his elder brother Erwin. Ronald’s first international goal came in December of the same year, in a 3–0 defeat of Iceland at Groningen’s Oosterpark Stadion.

With the Netherlands unable to qualify for UEFA Euro 1984 and the 1986 FIFA World Cup, Koeman’s tournament debut came at Euro 1988 in West Germany, where Rinus Michels’ team defeated the hosts at the semi-final stage, with Koeman scoring a crucial penalty to equalize and make it 1–1.

After this match, Koeman provocatively pretended to wipe his backside with the shirt of Olaf Thon in front of the home supporters. In the final, the Netherlands defeated the Soviet Union 2–0 at Munich’s Olympiastadion to win the nation’s only major international trophy.

This completed Koeman’s extraordinary 1988 after winning the treble with PSV. Both Koeman and his central defensive partner Frank Rijkaard were named in UEFA’s Team of the Tournament.

Born in Zaandam, Koeman began his career at FC Groningen before transferring to the Netherlands’ most successful club Ajax, where he won the national Eredivisie title in 1984–85.

He then joined Ajax’s rivals PSV, winning three consecutive Eredivisie titles (1986–87, 1987–88 and 1988–89) and the European Cup in 1988. Ronald Koeman is one of five European players to ever win a Treble with their club and a cup with their national team in the same year.

In 1989, Koeman moved to Barcelona and became part of Johan Cruyff’s “Dream Team”, helping the club win La Liga four years in a row between 1991 and 1994, and the European Cup, where he scored the winning goal of the final against Sampdoria in 1992.

Football manager and a former Dutch football player Ronald Koeman has an estimated net worth of £2 million. He has earned his money through playing for the top clubs along with coaching some of the biggest clubs in the world