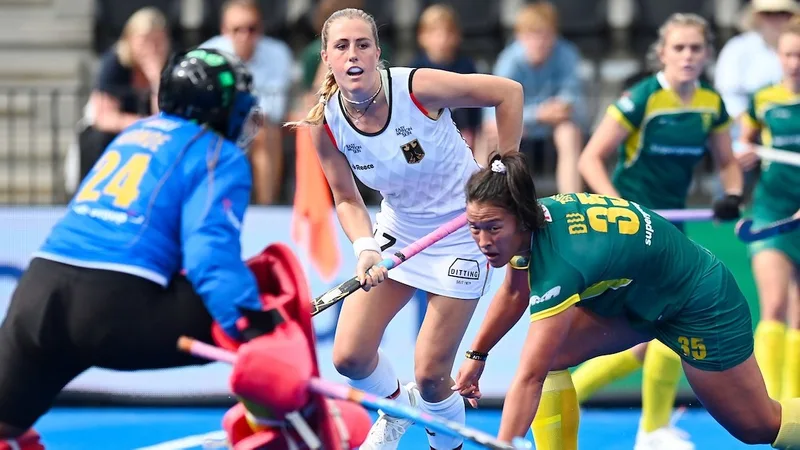 Germany and Belgium through to the quarter-finals where New Zealand and the Netherlands lie in wait. Penalty corner strategies were on display in the opening round of mixed-team games. Even though Germany beat South Africa by a score of 1-0, they will be disappointed.

Then Belgium came through with a spectacular performance, scoring five goals against Chile thanks to their expert finishing on set pieces.

This shifts the focus to the matchups between Chile and China, and South Africa and Ireland, for the top spots in the 13-16 bracket. Meanwhile, Belgium will take on regional rivals and defending champions the Netherlands in the quarterfinals, while Germany will play New Zealand.

It was always going to be a tall order for South Africa to beat fourth-ranked Germany when they were 16th in the world. South Africa would have earned a great deal of worldwide respect for their performance had it not been for their resolute, dogged defense, great goalkeeping, and a bit of luck.

German pressure in the first half was met by resolute South African defense, and the score remained scoreless. In the early goings-on, Amelie Wortmann got the closest but missed just wide.

Germany applied intense pressure to the South African inner circle in the second half. There was a marked uptick in play, and early on, the pressure resulted in a number of penalty corners. Phumelela Mbande made two fantastic saves in the first, but Germany botched the follow-up.

The third time was the charm for Nike Lorenz, who scored on a perfectly placed shot. A release of pent-up tension allowed the Germans to unleash their aggressive maneuvers after scoring. After Pia Maertens and Anne Schroeder made a nuisance of themselves in the South African penalty area, Viktoria Huse scored on a shot that sailed over the crossbar.

Nevertheless, the teams started the fourth quarter with the score still at a slender 1-0. Kristen Paton and Jean-Leigh du Toit deserve a lot of the credit for their gutsy play in the penalty corner. With only one goal coming from 16 penalty corners, Germany has reason to be concerned.

Bonnet was going to substitute for the goalkeeper for the final few minutes, but Edith Molikoe was sent off.

Honorable Mention: Match’s Most Valuable Performer German player Nike Lorenz commented, “It was a tough game.” It was not a shock because we have never won a game against South Africa while scoring several goals. Next time, we need to figure out how to better utilize penalty corners. More goals must be scored if we are to have any hope of winning the World Cup.

To start the game, Belgium resisted a flurry of effort from Chile in their circle, intercepted the ball thanks to Michelle Struijk’s excellent positioning, and raced up the field to win a penalty corner. There was no mistaking Stephanie Vanden Borre’s pinpoint shot as it sailed past Claudia Schuler and into the far corner of the net.

Schuler made a spectacular stop on a second penalty corner, but Belgium was awarded two consecutive re-awards. However, after receiving a ball from Alix Derniers, the second goal was scored by Louise Versavel thanks to some fantastic free running. Fast down the left side, Versavel received the ball and crossed for Justine Rasir to put it in the back of the net.

Stephanie Vanden Borre scored twice in the final minutes of the first quarter to put Belgium in control.

In the fourth quarter, Chile really didn’t let their higher-rated opponents rest on their laurels as they won a succession of penalty corners. Unfortunately for Sergio Vigil and his teammates, the Belgium defense was as pumped up as the attacking line.

Honorable Mention: Match’s Most Valuable Performer Charlotte Engelbert (BEL) said: ‘I anticipated it was going to be a bit tougher but we scored goals early and that calmed us down. It is good to play in front of our supporters and now we are looking forward to meeting Holland next week. Nothing to lose, right?

On Sunday, July 10, the Wagener Stadium in Amstelveen will host the opening two games of the FIH Hockey Women’s World Cup. At 13:00, China will play Chile, and at 15:30, Ireland will face South Africa in the 9-16 playoffs.

After that, at 18:00, England will play Korea, and at 21:30, Spain will play India in the second set of cross-over matches. Both games will be held in the Estadi Olimpic de Terrassa. Timezones are based on the Central European Time zone.

Women’s Hockey World Cup 2022 Hosted by Spain and the Netherlands, organized by the FIH

Germany and Belgium through to the quarter-finals