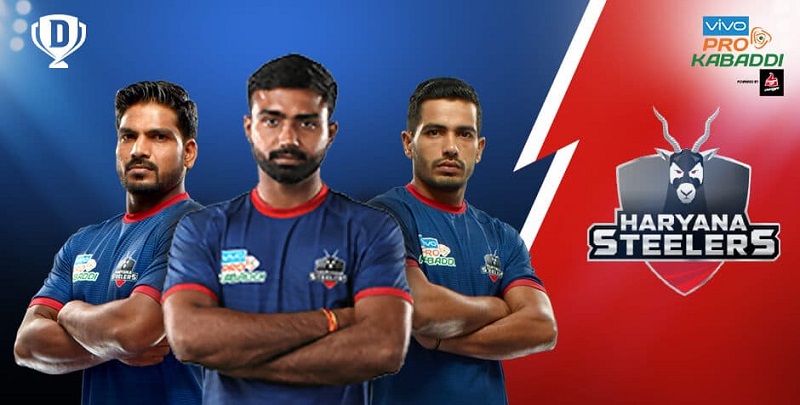 Haryana Steelers a Pro Kabaddi 2021-22 team, a Panchkula, Haryana-based franchise, is all set to roll its game in the Pro Kabaddi 2021-22. the team was founded in the year 2017 where it played its season 1 of the tournament. The stadium for the team is Tau Devi Lal Stadium (Panchkula) which has a capacity of 7000 capacity. So check HARYANA STEELERS Players 2021-22 List.

Haryana Steelers are also known as Steelers by the nickname Pro Kabaddi League. The team played their previous season in 2019. It is one of the teams where they have played a total of 22 matches in season VI where they won 6 matches and lost 14. Their total points on the points table are 42 points.

The team is head and led by Dharmaraj Cheralathan and the head coach of the team is Rakesh Kumar. The team has 2 Playoff berths.

The home ground of the team Haryana Steelers is Tau Devi Lal Stadium (Panchkula), which has 7000 people.

The Dharmaraj Cheralthan is the captain of the team who is also a Defender, Right & Left Corner. The team’s other team players are Amirhossein Mohammad Maleki, Arun Kumar HN, Naveen, Prashant Kumar Rai, Selvanami K, Vikas Chillar, Vikas Kandola are the raiders of the team.

The jersey is a blue and white mix color. These two colors also represent the teams Haryana Steelers in the Pro Kabaddi League.

The jersey for the season is also going to be the same as previous seasons.