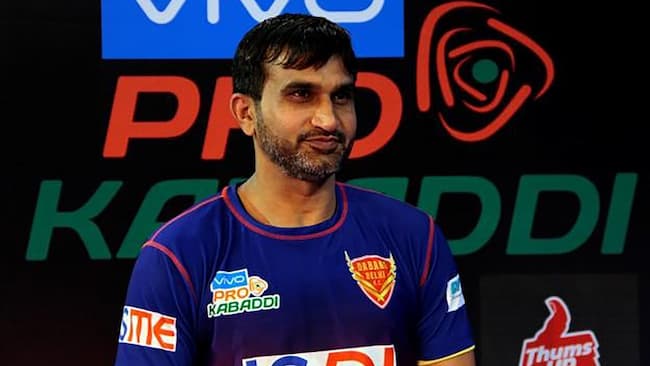 Joginder Singh Narwal is an Indian Kabaddi Player. He was born on 20 April 1982 in Gohana, Haryana. Joginder loves to play kabaddi since childhood. After his graduation from Maharshi Dayanand University (MDU), he joined kabaddi. Check Joginder Narwal Salary and Total Net Worth.

Narwal is playing kabaddi in the Pro Kabaddi League since season 2. He played the first two seasons for Bengaluru bulls. He is currently playing for Dabang Delhi KC as a defender operating in the left corner.

Check out his Career, Salary, and Net Worth.

Joginder made his professional debut at the Pro Kabaddi League with the Bengaluru Bulls in Season 2. He continued to play for the same team for the next season also. In 2016, he was unable to participate in the league due to injuries.

He played in season 4 for the Puneri Pultans and earned 38 raid points. In 2017, Joginder moved to the U Mumba and appeared in 8 matches. In 2018, Joginder signed a contract with Dabang Delhi KC for season 6. He earned 51 raid points at the end of the season.

Joginder was picked by Dabang Delhi K.C in 2021 for Vivo Pro Kabaddi Season 8.

His salary for season 8 of the Vivo Pro Kabaddi is 20 lakhs. The salary of season 6 was 33 lakhs. He is the highest-paid defender on Dabang Delhi KC team.

The total net worth of Joginder Singh Narwal is Rs 5-6 Crore. His worth would increase in the coming seasons.