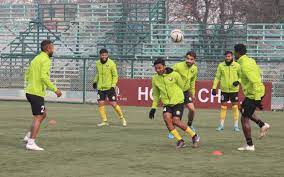 RGPFC has retained its second-place standing in the table, behind Sreenidi Deccan FC, who has played one more games than they have.

RGPFC came out stronger in the first half, employing their standard high press technique to deny the opposition any time on the ball. On the wings, Pranjal Bhumij and Juan Mera were animated. In the 12th minute, RGPFC went in front. Luka Majcen was in a free position when Pranjal sent an enticing ball into the box, and he rose high to land a thunderous header beyond the NEROCA goalkeeper to put the home team ahead. The goal marks Luka’s sixth of the year.

The ball was taken away from the NEROCA wingback by Juan Mera, who then found Luka Majcen right outside the penalty area. In the 15th minute, Brandon Vanlalremdika, who was racing, received a superb pass from Luka and poked the ball past Shubham Dhas to double the advantage. In the 44th minute, NEROCA cut the deficit in half against the odds. Yumnam Gopi Singh was able to beat goalkeeper Kiran Kumar Limbu with a first-time shot after the RGPFC defense only partially cleared a ball from the centre from Tangva.

In the 77th minute, a goal by Krishnananda Singh gave RGPFC the advantage against NEROCA. Maheson Singh, a substitute, sent Krishnananda with a wonderful through pass, and Krishnananda was able to outrun the NEROCA goalkeeper and score into an empty net.

RGPFC has nine wins and nine points while NEROCA FC has ten losses and seven points.