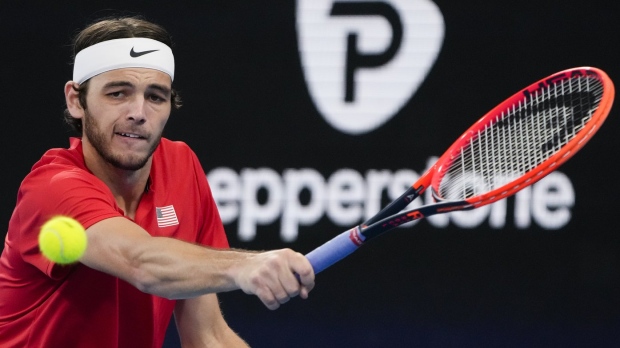 With a dominant performance, world No. 9 Taylor Fritz defeated Italian Matteo Berrettini to lead the United States to the first-ever mixed teams United Cup victory in Sydney on Sunday.

In the best-of-five match, Frances Tiafoe and Jessica Pegula each won their singles matches to give their nation a 2-0 lead. Fritz then delivered the triumph by winning 7-6 (7/4), 7-6 (8/6).

We had really high expectations going into this competition, so it’s great for the squad to win,” remarked Fritz.

“Really excited to have the opportunity to win the game. When you succeed, you feel incredible feelings.

In the championship match of the new competition, which started with 18 nations competing in round-robin matches in Perth, Brisbane, and Sydney, a powerful United States defeated Iga Swiatek-led Poland 5-0, while Italy outclassed Stefanos Tsitsipas’s Greece 4-1.

In his first two service games, Fritz applied consistent pressure to the Berrettini serve, collecting four break chances, but none were successful.

Despite the American being in command from the baseline, the first set tiebreak went to him, and he won it with two crucial early breaks that put him 3-0 up.

In the second set, Fritz again generated a number of break opportunities, but Berrettini held on and the match ended in a tiebreak, which he won once more.

Pegula, the third-ranked woman in the world, defeated Martina Trevisan 6-4, 6-2 to move into the top 10 in 2022 after winning the WTA 1000 Guadalajara event.

The Italian then withdrew due to a right shoulder injury as Tiafoe won the opening set 6-2 against Lorenzo Musetti.

“Martina is playing terrific, she’s a warrior, and I get the impression that she thrives on the energy created by the crowd and her teammates. It’s really hard to defeat someone like her.”

Glad I played well enough to get the victory.”

Maria Sakkari, ranked sixth in the world, was shocked by Trevisan in a thrilling three-hour match on Friday.

On the quick hard courts, they traded breaks once more before Pegula pounced once again to break Trevisan’s serve and take the set with a backhand winner.

In the second, Pegula put her foot down and won by a margin of 5-0.

Although the American was serving for the match, the Italian wouldn’t give up and broke back before her comeback stalled.

Following in Pegula’s footsteps, Tiafoe quickly broke Musetti’s serve while fending off all three break points he was presented with.

The Italian touched his right shoulder more and more as the set went on before getting help and called it quits at the finish.

The date for PSG’s friendly match in Saudi Arabia has been set for Cristiano Ronaldo vs. Lionel Messi