India Women and South Africa Women will compete in the first match of the South Africa-India-West Indies tri-series at Buffalo Park in East London. The Women’s Twenty20 World Cup, which will be held in South Africa only, will be a crucial practice series for all three teams. Sune Luus-led South Africa’s team performs exceptionally well at home. This team’s best asset, the all-rounders, will be managed by Marizanne Kapp. Ayabonga Khaka and Msabata Klass provide Shabnim Ismail, the best pacer in South Africa, with some skilled support.

The Indian Women’s Cricket team will try to win the series here after a successful home series against Australia. Smriti Mandhana and Harmanpreet Kaur will once again lead the Indian team, but the way Richa Ghosh batted in the previous series will give the lower ranks a lot of confidence.

In the previous match, Yastika Bhatia was in good form, scoring a 34-ball 35. She can bat both in the top and middle orders well and is a good spin and pace player.

Shemaine Campbelle is a veteran campaigner who has scored 905 runs in 112 T20I matches. She was one of the few Windies batters in the previous game against South Africa to reach double digits. Your IN-W vs. WI-W Dream11 prediction team may benefit from Campbelle’s ability to score runs quickly in the middle order.

In India’s victory over South Africa, Deepti Sharma stole the show with 33 runs and three wickets. While Sharma’s batting is an advantage, her bowling is what sets her apart. Deepti is a must-have player for your IN-W vs. WI-W Dream11 prediction team because she has a lot of experience playing in different countries and is in good form.

The Windies’ standout bowler against South Africa was Shamilia Connell, who took two wickets and only gave up 17 runs in three overs. Connell is a skilled new-ball bowler who is also able to adjust her speed to make the most of the conditions. Connell would make a great addition to your IN-W vs. WI-W Dream11 prediction team given the circumstances.

There’s a good reason Hayley Matthews is one of the best all-rounders in the world. Matthews has scored 1349 runs in T20Is with a strike rate of over 100. Matthews is an excellent captain’s pick for your IN-W vs. WI-W Dream11 prediction team because of her exceptional off-spin skills.

With 2572 runs in 108 T20Is, Smriti Mandhana is a world-class batter. She is well-positioned due to her average of 27.07 and strike rate of 123.47. Mandhana has a lot of experience and can be backed as captain or vice-captain in your IN-W vs. WI-W Dream11 prediction team, despite the fact that she did not score many runs in the previous game.

In the previous match, South African spinners Mlaba and Tryon each took a couple of wickets for the West Indies, who had a difficult time dealing with left-arm spin. In a similar vein, Radha Yadav is one of the world’s best left-arm spinners, averaging 21.31. In your IN-W vs. WI-W Dream11 prediction team, Radha could be a game-changing selection because she has already demonstrated good control and accuracy in the previous game.

East London has clean weather in ZA. On the day of the match, the wind speed is 5.0 kilometers per hour, the humidity is 74%, and the temperature is expected to be around 28 degrees Celsius. In addition, visibility is 10 kilometers. There are no chances of precipitation during the game.

The Disney+Hotstar app and website will stream all of India’s IND-W, SA-W, and WI-W Tri-series matches live. 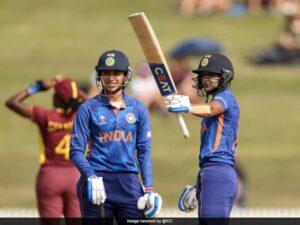