ISL 2021-22 New Coaches And Managers list of every team 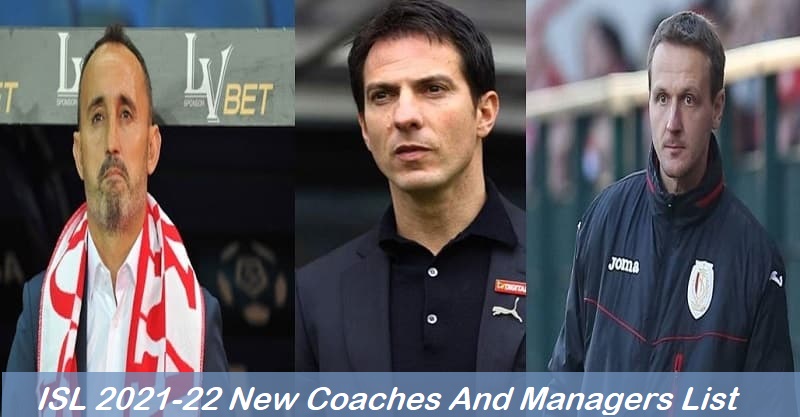 Indian Super League (ISL) will be launching its season 8 of the professional football league this November 2021. The game has a huge fan following in India and the league features the best of the football teams in the league. So check ISL 2021-22 New Coaches.

The league features all 12 teams where they compete for the winning title of the league. Here are the details about the Indian Super League 2021-22 New Coaches and managers that are a part of the team.

ISL 2021-22 New Coaches And Managers List Of Every Team

Chennaiyan FC now has a new manager for the team Bozidar Bandovic who has pulled off a master class. He is a former football player and now professionally manages football clubs. He is a master in the football game as a defender.

Currently, he is serving as the manager of Chennaiyin FC as the head coach. Under his guidance, the team is looking forward to making it to the winning of the tournament in ISL 2021.

He has a huge pack of achievements in his career in football. Bandovic bags Thai top-flight titles in 2017 and 2018. He is also a winner of the Thai Champions in 2019.

Kiko is a Spanish former football player who currently managing the Odisha FC of the Indian Super League. He is an expert as a forward in the game of football. Kiko’s career is mostly based on Gimnastic as a player and as a manager.

He is replacing the position of Steven Dias in the team. His entry in the game is a chance for Odisha FC to make it to the top of the list in the ISL. The club finishes previous as the last on the point tables.

The Serbian football manager and 44 years old former football player currently managers Kerala Blasters. He is a holder of Belgian citizenship and plays football in the position of Defender and Defensive midfielder.

The German football manager is currently managing the team Bengaluru FC in the Indian Super League. He will be replacing the Naushad Moosa in the Marco Pezzaiuoli. Marco will be bringing up the Bengaluru FC to the league table with the German brand. He was also a technical director at Eintracht.

He is also a manager of a German football club representing at various levels.

For more recent updates about the sports world stay tuned with us..!!