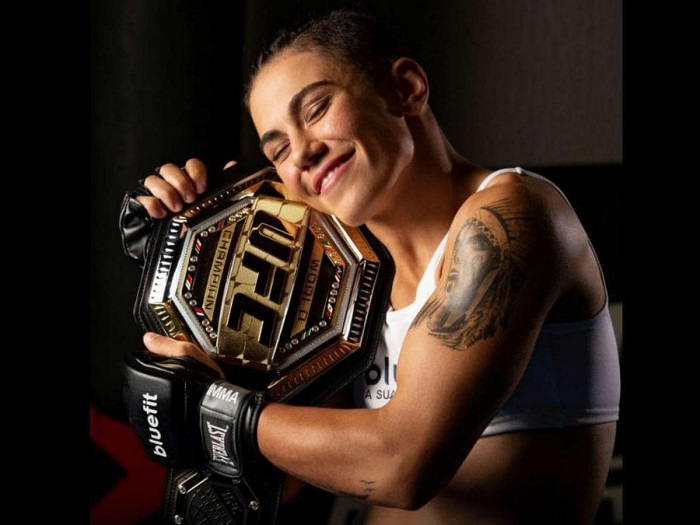 As mentioned earlier, Andrade (21-9) will hope for a win after a string of negative results in the last few matches. Her skid started immediately after she captured the strawweight belt from Rose Namajunas. As her first title defense, ‘Bate Estaca’ fought against the Chinese mauler Weili Zhang at UFC Fight Night 157. Zhang finished Andrade with a devastating TKO win inside round 1. Check Jessica Andrade Net Worth.

After almost a year, Andrade returned to face Namajunas in a rematch from UFC 237. This time, Namajunas did her homework as the match went into the distance. She defeated Andrade to avenge her previous loss. The back-to-back losses completely derailed Andrade’s momentum as she had racked up 4 consecutive wins before the skid began. In order to get back on track, Andrade started positively against Katlyn Chookagian at UFC Fight Night 180 and ultimately picked up a KO win in round one.

Jessica Andrade has a decent net worth of approximately $1.75million as of 2021. This, of course, is largely down to her 8-year-long UFC career. At just 30, she is expected to add handsomely to that.

As for her payouts, she earned $185,000 in her last fight, which came in a win against Katlyn Chookagian at UFC Fight Night 180. But her highest-earning payout from a single fight came against Rose Namajunas.

The two fought it out for the strawweight title at UFC 237. The Brazilian emerged victoriously and took home $235,00 along with it. She has been earning in six figures per fight for her last 10 bouts running and has total UFC career earnings of $1.65million.

Her next fight was against flyweight champion Valentina Shevchenko. The ‘bullet’ dominated Andrade from start and picked up a TKO win. Calvillo (9-2) will head into this fight after suffering a loss against Chookagian last time around at UFC 255. She was going strong and was undefeated in 4 matches prior to the above-mentioned fight.

Former UFC women’s strawweight champion Jessica Andrade will lock horns with Cynthia Calvillo at UFC 266 on September 25, this year. Jan Blachowicz vs Glover Teixeira will headline the event whose venue and location are yet to be disclosed.

First reported the booking although UFC is yet to announce this officially. Andrade is under pressure to get a win here as her last 4 outings have only yielded one victory. She last appeared in the octagon against the flyweight champion Valentina Shevchenko at UFC 261 and suffered a brutal TKO loss at the hands of the ‘bullet’.