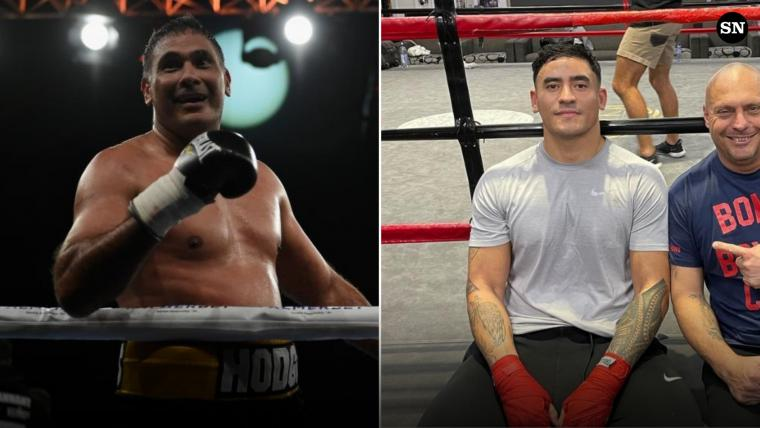 Justin Hodges vs Jordan Simi – Nikita Tszyu undercard. Justin Hodges is set to build towards a fight with Paul Gallen, after his next bout was confirmed for the 20th of July 2022.

Justin Hodges (4-1) will take on social media personality Jordan Simi. Smith will be making his professional debut with this bout.

The 40-year-old defeated Ben Hannant a couple of weeks ago in Brisbane, and his next fight is set for the Nikta Tszyu undercard for No Limit.

No Limit confirmed the mentioned news on Tuesday morning, the 12th of July 2022.

The former Broncos and QLD Maroons star stated that he hopes Simi is taking the fight seriously and wants a decisive win to set up a clash with Gallen and face him in the next bout.

“I got the win against Ben but if I am honest, I was as disappointed that he was still standing at the end…Jordan Simi will not be as lucky,” he said.

“I could have gone back home and sat around waiting for the Paul Gallen fight to happen but who knows with Gal and his schedule if that was going to be anytime soon.”

“He has been chasing Sonny Bill for a decade. I was not going to wait around on his terms for my next shot, so I told George Rose if an opportunity came up before then I would take it.”

“Admittedly, I did not think my next fight would be this quick but if a knockout of this YouTuber next Wednesday secures me a payday with Gal later this year, then bring it on.”

“This is a serious fight and I plan on doing serious damage to him. I hope he is taking it seriously and not trying to pretend to be some Jake Paul wannabe chasing followers on his YouTube or whatever.”

“This is not social media, this is a fight game, and you are going to get hurt.”

Hodges has been expecting a fight with Gallen for quite some time, and the ‘G-Train’ said he would take on the winner of Hodges and Hannant that took place last month.

The promoter of No Limit, George Rose said if Hodges was to earn another KO win, he would look to immediately sign the Gallen fight.

“I have no doubt Hodgo will be calling on all of his Queensland spirit to get the knockout in Sydney on July 20, just a week after the Origin decider,” he said.

“There are not too many fans that like him in New South Wales around Origin time, but Justin always takes it in his stride and gives fans the entertainment they expect.”

“A convincing win here for Hodgo and I will probably be looking to get him and Gal to sign the contracts before they’ve left the venue on the night.”

Jordan Simi has become one of the faces of YKTR – a brand owned by the former National Rugby League stars Isaac John, Corey Norman, and James Segeyaro.

The main event will see Tszyu take on Ben Horn, the younger brother of Jeff at the Hordern Pavilion.