On January 17, the Khulna Tigers (KHT) will face Rangpur Riders (RAN) in the 15th match of the Bangladesh Premier League at the Zahur Ahmed Chowdhury Stadium in Chattogram. The Tigers have dropped all three games in this event and currently lie in sixth place in the rankings.

Khulna Tigers have had the worst possible start to their campaign in this competition, losing three consecutive games, while Rangpur Riders have had a mixed season, winning two and losing one. The last time these two teams met was in a game where the Riders won the toss and decided to field.

Wicketkeeper Azam Khan has been outstanding thus far in the competition. His tournament consistency makes him the greatest selection in the wicketkeeper category.

Shoaib Malik has the most runs in the competition among the batters engaged in the match. He has been in good form, making him the most valuable batter selection for the contest.

All-rounder Mohammad Saifuddin has the highest take-home pay for Khulna Tigers. He has not just taken wickets but has also been frugal. Furthermore, the fact that he can bat and score some runs later in the order makes him the ideal all-rounder selection.

Robiul Haque, the Rangpur Riders’ bowler, has been outstanding. His ability to take wickets at vital times makes him an excellent choice from the bowler’s category.

Azam Khan’s performance in the event gives him a safe bet for the match. He will be a wonderful point multiplier for the match because he has been consistent throughout the competition.

Robiul Haque might be the difference-maker in the captain or vice-captain role for this match. Because he exploits his diversity at the right times to take up critical wickets, he is one of the greatest options for a point multiplier.

In the second half, the pitch will improve for batting. Since a result, it would be prudent to wait for the toss and then add additional top-order batsmen from the chasing team, as there is a good possibility they will chase down the target.

Pacers will benefit from the track’s balanced conditions at the Zahur Ahmed Chowdhury Stadium. There will be plenty of speed and bounce to go around. Once relaxed, batsmen can look to play their strokes. So far, this pitch has been a run feast for batters. Teams prefer to chase on this ground, and the team was successful the last time.

For the time being, there is no prospect of rain. The temperature will be approximately 25 degrees Celsius, with humidity primarily in the 40s.

Use Fancode to watch BPL 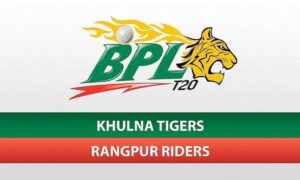