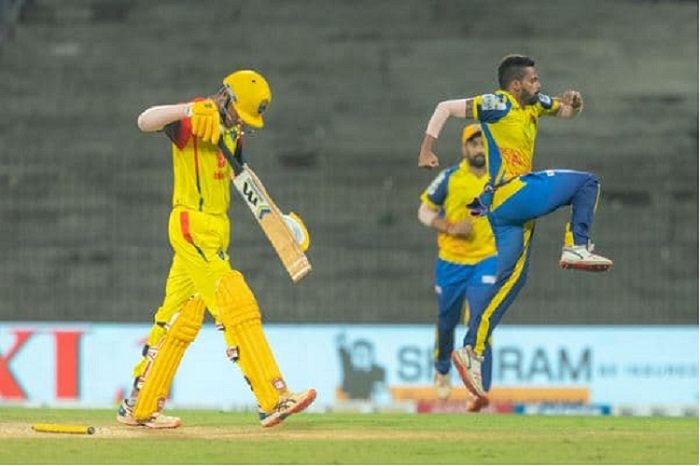 Chennai, August 11: Bhardwaj Sai Sudharsan was back among the runs to help Lyca Kovai Kings post a competitive total against last season’s finalists Dindigul Dragons in the Eliminator duel of the Shriram Capital Tamil Nadu Premier League at the MA Chidambaram Stadium here on Wednesday.

The 20-year-old Sudharsan, who had hit a grey patch after a series of big scores, returned to form with a sparkling 57 off 40 balls (3 fours, 2 sixes) to lift Kovai Kings to 143-6 in 20 overs. On a pitch where bowlers had a bigger say, Sudharsan stood out with his batting display to notch his fifth half-century in the tournament. He swelled his run tally to 353 runs and maintained his top position in the batting chart. After being put in to bat, Kovai Kings were struggling at the halfway mark with just fours in a total of 49-3. But in

the next 10, they kicked on to add 94 runs. Sai Sudharsan was at the center of this revival along with his captain Musa Shahrukh Khan (28 off 22 balls, 2 fours, 1 six) as they raised 62 runs off 42 balls for the fifth wicket.

Left-arm pacer Gurjapneet Singh (3-22) was the pick of Dindigul bowlers along with left-arm spinner Munnusamy Silambarasan (1-23). The 23-year-old Gurjapneet was brilliant in the death overs mixing the slower deliveries well to fox the batsmen.