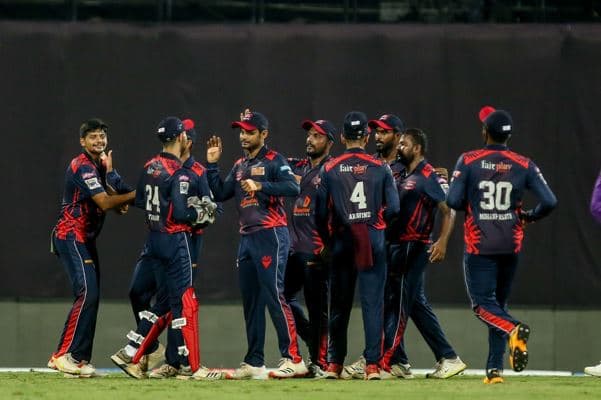 Chennai, August 2: Siechem Madurai Panthers made a strong finish to raise a respectable total onboard against iDream Tiruppur Tamizhans in their Shriram Capital Tamil Nadu Premier League match at the MA Chidambaram Stadium here on Monday.

Captain NS Chaturvedi (41 not out off 23 balls, 1 four, 4 sixes) and all-rounder  Jagateesan Kousik (40 off 20 balls, 3 fours, 2 sixes) provided the impetus at the end with a 78-run partnership off 42 balls for the fourth wicket to lift Madurai to 184-4 in 20 overs, their highest total of the season. Chaturvedi and Kousik were aided by the platform set by the earlier three batsmen – openers P Praveen Kumar (35 off 37 balls, 2 fours, 1 six), P Sugendhiran (20 off 12 balls, 2 fours, 1 six), and B Anirudh Sita Ram (33 off 25 balls, 3 fours, 1 six). Wicketkeeper-batsman Praveen Kumar held the innings together in the initial stages by

first notching 35 runs off 29 balls for the first wicket with Sugendhiran and then adding 54 off 44 balls for the second wicket before holing out in the deep.

Such was Chaturvedi and Kousik’s dominance in the slog overs that Madurai added 88 runs in the last six overs to surpass their earlier best of 153-8 that came in a losing cause against Lyca Kovai Kings last month.

The 31-year-old Chaturvedi signed off the innings in style with a big six-over-long-on-off rival captain M Mohammed.

Madurai will take confidence from this showing as all batsmen who stepped to the crease made an impact, including veteran KB Arun Karthick, who came in at No.6  in the final over and straightaway smacked a six and four of the first two balls he faced to remain unbeaten on 11 off 3 balls.

For Tiruppur, medium-pacer A Karuppusamy was the best bowler picking up two wickets off successive deliveries to finish with 2-14 from his two overs.