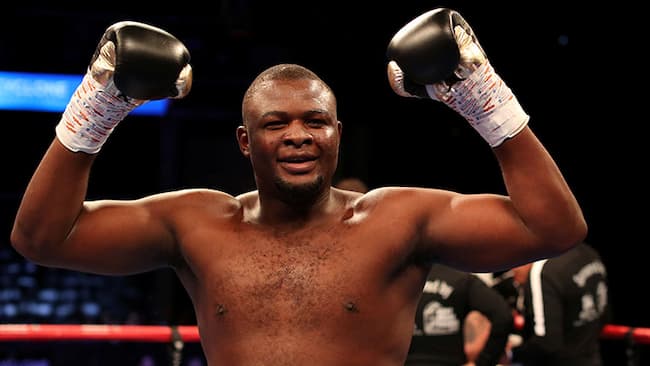 Martin Bakole Ilunga is a professional boxer who lives in the Democratic Republic of Congo. He was born on 1 June 1993 in Kananga. He is the younger brother of boxer Ilunga Makabu. Check Martin Bakole Boxer Net Worth.

The son of the ruler of the Kananga province in the Congo has boxing and Irn Bru running through his royal blood after moving to Scotland to chase his dreams.

Check out his biography, Net Worth, Ranking on this page.

Bakole made his professional debut on 25 March 2014. He scored a second-round technical knockout (TKO) victory over Cecil Smith at the Emperors Palace in Kempton Park, Gauteng, South Africa.

His big brother Ilunga Makabu came to Goodison Park in 2016 to take on Tony Bellew. Bakole came along and stayed in the UK. Martin quickly became one of AJ’s favorite sparring partners.

After compiling a record of 9–0 (6 KO), he faced undefeated Ali Baghouz at the Royal Highland Centre in Edinburgh. They fought for the vacant IBO Continental heavyweight title on the line.

Bakole captured the vacant title via first-round knockout (KO). He successfully defended the title in his next fight. Martin won with a first-round TKO against DL Jones on 23 June 2018 at The SSE Hydro in Glasgow.

He has a professional record of 17-1 with his only loss coming against Michael Hunter. It was for the vacant IBO-Heavyweight title on 13 October 2018.

Martin’s income source is mostly from being a successful Boxer. He is Congolese.

WWE Day 1 2022: You can watch on the following channels in India