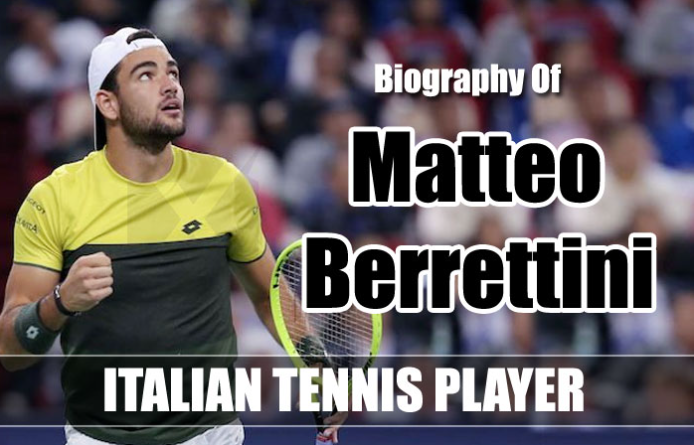 Matteo Berrettini Journey So Far: Matteo Berrettini is an Italian player. He was born on April 12, 1996. His career high rank was 20, which he achieved in June of 2019. On July 22nd, he also reached 105 in the world rankings for ATP doubles.

Matteo Berrettini started playing tennis at age 7 due to his brother’s requests. When he started, he could not stop and has been in love with it ever since.

Berrettini made his debut in the Italian Open after a pre-qualification round awarded him a wildcard. He lost in straight sets to Filippo Baldi, but did end up with the top seed for the final qualifying spot.

Gianluigi Quinzi won the Swiss Open Gstaad in an incredible performance. He then went on to earn his first ATP doubles with Daniele Bracciali.

This year he achieved titles at two prestigious championships: the Hungarian Open and the Bavarian International Tennis Championships in Stuttgart. He was able to advance to the semifinals in Halle, Germany and to Wimbledon’s second week as a seventeen seed.

Berrettini was in a relationship with Lavinia Lancellotti, but they broke up. There are speculations online that Berrettini dated Genie Bouchard (not confirmed). According to reports, Nick Kyrgios’ former girlfriend Ajla Tomljanovic may have been dating the Italian. In fact, Ajla was seen in Matteo’s box at the US Open and probably during his match against Diego Schwartzman at Wimbledon.

Matteo Berrettini shared that he can’t believe what has happened. He said that he still needs more time to understand what transpired. He is just happy and content with his team, family, and opponents during his on-court interview.

In 2015, he won his first pro title in Italy F30 and the year after that he hit an injury and couldn’t participate in any tournaments for many months. Luckily, in December 2016 he got another chance at a Challenger Tournament where he qualified for the finals and ended up getting his second ITF title.

He made his ATP debut in the Italy Open and won the first ATP title in Switzerland. In 2018, he played at the grand slams and Davis cups. In 2019, he won his second ATP title in Hungarian Open. Had qualified in the finals of Bavarian International Tennis Championships but lost to Zverev in the final match.