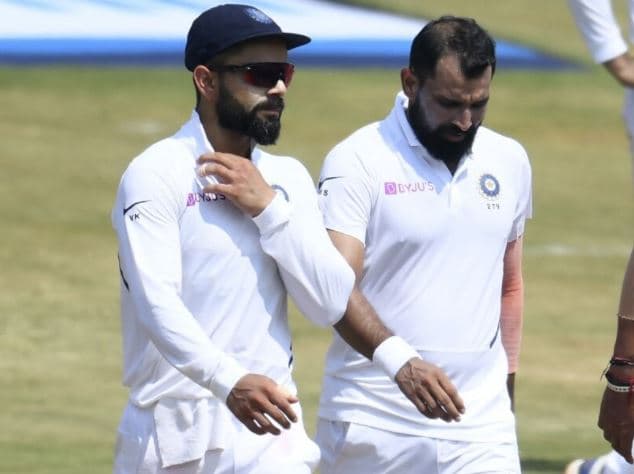 India and South Africa’s playing test series in which Batsman of India don’t show their good performance but Ballers like Mohammad Shami and Jasprit Bumrah full fill all gaps.

This is 3rd match of this series which is playing under the captaincy of Virat Kohli and Kohi won the toss and choose to bat and in the first inning, he make 79 runs.

Virat Kohli is whether inside the field or outside, never lags behind in encouraging his players. in this match, he also does something like this.

On one hand, Jsprit Bumrah take 5 wickets by giving 42 runs only and on another side, Mohammed Shami showed Temba Bavuma the way to the pavilion in the 56th over.

Bavuma’s catch was caught by captain Kohli only. Even after taking this wicket in his name, Shami did not stop there.

He then also walked African wicketkeeper Kyle Vierne. Let us tell you that the catch that Virat Kohli took off Shami’s ball was also the 100th catch of his Test career.

Virat Kohli Applaud with other players for ballers and Mohammad Shami

For a moment, South African batsmen Temba Bavuma and Keegan Pietersen stood with their pegs on the wicket but soon Mohammed Shami broke it.

Shami was bowling the ball but it was captain Virat Kohli who did the job of filling the fire.

The captain started filling all the fielders and bowlers with enthusiasm in the session before the tea break.

Even Virat Kohli asked the Indian players sitting in the dugout to clap all of them.

As Virat Kohli was infusing enthusiasm within his players, so did the spirit of the bowlers.

Flop Form of Batsman continue in this match

If team India won this match then its credit goes to Mohammad Shami, Jasprit Bumrah, and other ballers with Cheteshwar Pujara and captain Kohli.

Opener pair of team India goes to the pavilion by making under a score of 20, Partnership of Cheteshawr Pujara and Virat Kohli give strength to the team, Pujara makes 46 and Kohli make 79 runs.