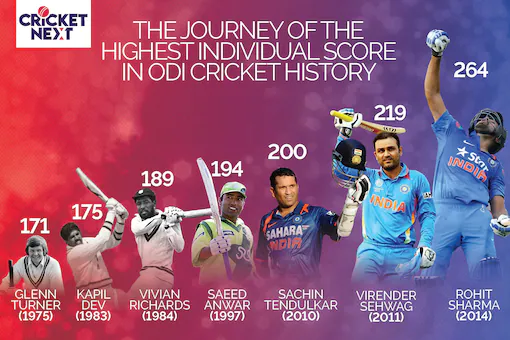 Most Runs For India in ODI: Since 1974, India has participated in One-Day International (ODI) cricket, and their batting has been a significant factor in the country’s success in these matches.

After winning the World Cup in 2011, India has been recognised as a team that is equally good in all aspects of cricket. Previously, India had a reputation for being particularly strong in the batting category.

In one-day cricket, Sachin has scored the most hundreds and fifty-point scores. The best guy in the world also holds the record for the highest number of times (41), among players who have scored 12000 runs, that they were not out. Tendulkar is also the first batsman in the history of one-day internationals to score a century and a half.

Virat has been regarded as the all-time finest performer in this format by a variety of specialists. Virat is the only player who is seen to be capable of breaking Sachin’s record in this format, which currently stands at 49 centuries and 96 half-centuries.

Since making his One-Day International (ODI) debut, Virat has been scoring regularly for India in terms of runs scored. In one-day international cricket, Kohli also has the greatest strike rate (92.83 percent) among players who have scored 10,000 runs.

In one-day international cricket, the former captain of India, Sourav Ganguly, ranks third all-time in terms of the number of runs scored by an Indian player (1,1363). Ganguly is one of five players on the India national team who have scored more than 10,000 runs in one-day internationals.

Ganguly made his One-Day International debut in 1992 against the West Indies, and he continued to play the game until 2008. Ganguly has a career batting average of 41 despite facing some of the finest bowlers in the history of cricket. During his career, he also served as captain of the team for a period of six years (1999-2005), during which time they competed in 147 matches and won 76 of those matches. The ICC Champions Trophy in 2002 was won by India under his leadership.

Rahul Dravid has scored 10,889 runs for India in one-day international cricket, which places him in the fourth rank on the list of players with the most runs scored for India. A “test player” label has been bestowed upon Rahul Dravid by the cricketing community.

However, Rahul was just as successful in a one-day international competition. With his faultless batting, he is one of the players in the game’s history who has worn out the opposition’s bowlers. In one-day internationals, Dravid has scored 83 fifty-point scores, which places him in second place among all Indian players. He has racked up runs while maintaining an impressive average of 39.16.

Dhoni participated in one-day internationals for the first time in 2004 against Bangladesh and continued to do so till 2019. His astounding batting average of 50.23 is achieved despite the fact that he bats at positions 6 and 7. Dhoni also holds the record for the greatest number of times (84 total) that he has not been out during One-Day Internationals. Dhoni has been the captain of the India one-day international team for the past 11 years (2007-2018), and he has the third-highest winning average (59.52).

When it comes to making the maximum number of runs for India in one-day international cricket, Mohammad Azharuddin is currently ranked sixth with 9378 runs scored.

Azhar made his first appearance in an ODI in the year 1985 and played in the sport for a total of 16 years. During that time period in India’s history, he was a significant figure. He had a respectable batting average of 36.92 runs scored. In addition, he led India to victory in 94 of the 174 matches in which he commanded the team.

The current explosive batter for India has scored 928 runs in one-day internationals, which places him seventh all-time for India. In 2007, Rohit made his professional debut in a match against Ireland. In the annals of one-day international cricket, Rohit is the only player to have ever scored three double centuries. Sharma has amassed 9359 runs when batting first and has a phenomenal average of 49.0 runs per innings. In addition to that, he has already broken 29 hundred and 45 fifties thus far.

Former Indian all-rounder Yuvraj Singh is now ranked eighth when it comes to scoring the most runs for India in one-day international cricket with 8701. The sport of Indian cricket has been greatly rescued by Yuvraj.

On the list, he is the only person who can do everything. He also had 111 scalps to go along with his remarkable average of 36.56 points. He was so good that he was named the Man of the Tournament during the 2011 World Cup. He also had a significant impact on India’s victory in the ICC competition.

Virender Sehwag, a former Indian dashing opener, has scored 827 runs for India in one-day international cricket, which places him ninth all time. In an age when the top bowlers, including Glenn McGrath, Brett Lee, Shoaib Akhtar, and Shane Bond, bowled viciously, Sehwag was a player who would start hitting from the very first ball, regardless of the format.

This was the case even when he faced some of the most difficult bowlers. His debut in one-day internationals came in 1999 against Pakistan, and he continued to play the game until 2013. Only Sehwag, one of the players on the list, managed to score runs at an impressively high strike rate of 104.33 percent.

Shikhar Dhawan, one of India’s current opening batsmen, is currently ranked tenth in terms of scoring the most runs (6,315) for India in one-day internationals. Dhawan made his ODI debut in 2010 against Australia. He is notorious for his combative approach to the game.

This far, he has accumulated runs with an impressive average of 45.76 runs per game. Dhawan was the player with the most runs scored in each of the two successive Champions Trophies, earning him two golden bats (2013,2017). In addition to this, among the Indian players who have scored more than 5000 runs for the national team, he has the second-best batting strike rate (93.37).

Things You May Not Know About Juame Munar