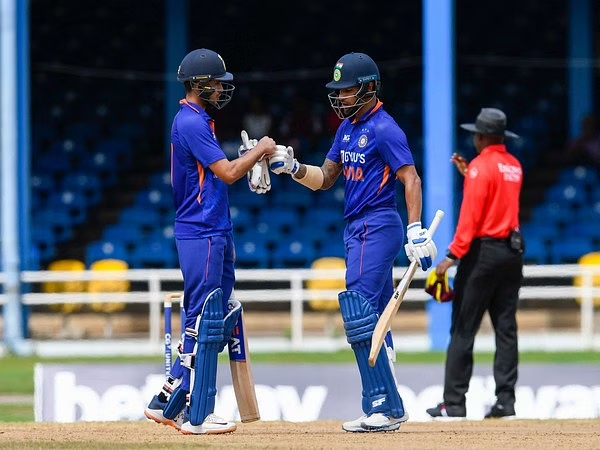 IND vs WI: India was able to reach 225/3 in 36 overs during the rain-delayed third and final one-day international match against West Indies at Queens Park Oval on Wednesday. This was made possible by a partnership of 113 runs between Shubman Gill and Shikhar Dhawan.

According to the Duckworth-Lewis method, the West Indies now have 35 overs to score 257 runs and reach their target.

The innings could have to be delayed because of the rain. But in spite of all of these setbacks, India was still able to post a respectable total on the board. Both Dhawan (58) and Gill (98*) kept up their impressive batting form, and the bowlers for the Windies were unable to do much to stop them. Additionally, Shreyas Iyer produced a very good 44.

India chose to bat first, and throughout the first 10 overs of their innings, they played with caution, rotating the strike and only occasionally hitting for significant scores. This conservative strategy paid off as openers Shikhar Dhawan and Shubman Gill were able to navigate through the necessary powerplay with a total of 45/0, with the duo remaining unbeaten at 22 apiece. This method was successful because it was cautious.

Gill was also looking incredibly polished with the bat at the other end and picked up his second ODI fifty, maintaining his good run in the series. This increased Gill’s total runs scored in the series to one hundred and fifty.

The pair’s stand of 113 runs was finally broken in the 23rd over of the match. Dhawan was dismissed by spinner Hayden Walsh for 58 runs off 74 balls, and the captain of the Windies, Nicholas Pooran, took the catch at mid-wicket. This gave the Windies their first breakthrough of the match.

The next batter to enter the crease was Shreyas Iyer. At this stage in the game, the rain stopped play with India at 115/1 after 24 overs, with Gill (51*) and Iyer (2*) still on the field.

The game was restarted as a battle with 40 players on the field at once. Following this, Gill-Iyer began to demonstrate a more offensive mindset with the willow, smashing boundaries and sixes. The very first over following the rain yielded 18 runs scored. The two players’ partnership scored 50 runs in only 30 balls of the game. The unexpected shift in gears threw the West Indies bowlers for a loop, and their confusion manifested itself in shoddy fielding on their part as a result.

The pair kept the scoreboard going and amassed 86 runs before Shreyas Iyer was bowled by Akeel Hosein for a good 44 off 34 balls after being caught by Keemo Paul at long-on. Iyer had scored 44 runs off 34 balls before being removed.

The next batsman for India to step up to the crease was Suryakumar Yadav. However, his streak of low scores persisted, and Walsh eventually ran him out of the game when Shamarh Brooks caught him for just eight runs at a backward point.

The next batter to step up to the plate was wicketkeeper and batsman Sanju Samson. The play was halted for a second time due to the rain, although Gill-Samson continued for a little longer.

The rain eventually brought a stop to India’s innings with the score at 225/3 after 36 overs, with Gill (98*) and Samson (6*) remaining unbroken.

Hayden Walsh’s profile and biography, stats, records, And net worth