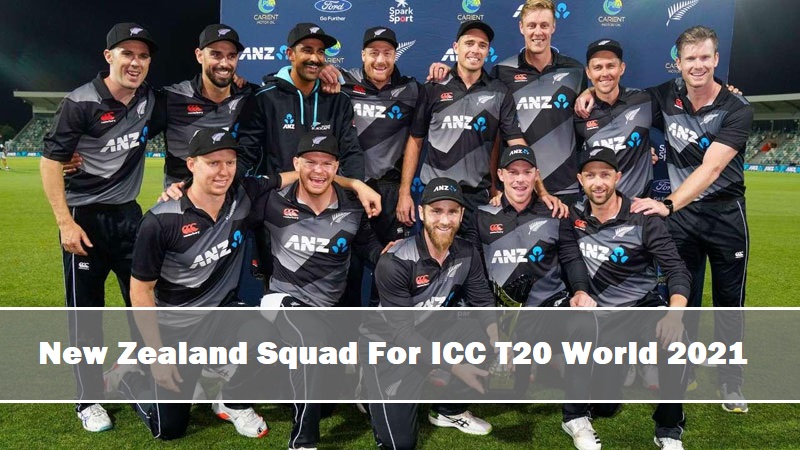 ICC tournament for 2021 which was scheduled to be taking in India however later the decision to shift the league was made by the ICC due to rising covid-19 concerns. The tournament will be rolling out the Twenty20 international cricket format for the league.

The squad for New Zealand is announced on August 10, 2021. Here is a complete list of the squads of New Zealand 2021.

The schedule for the team is out now. The matches will be taking place at different venues like Sharjah Cricket Stadium, Sharjah; Dubai International Cricket Stadium, Dubai, Sheikh Zayed Stadium, Abu Dhabi.

The coach for the team is Gary Raymond Stead where he is a former cricketer for the national team New Zealand. Gary is a right-handed batsman and leg-break bowler in the team. He is one of the top batsmen on the team.

The captain of the team is Kane Stuart Williamson. He is an international cricketer who is currently playing for the team New Zealand. Kane Williamson is a right-handed batsman and right-arm off-break bowler of the team.

2015-present he also plays for the IPL team Sunrisers Hyderabad and in 2017 he was a part of the Barbados Tridents.

The first-ever season of New Zealand in ICC was in 2007 where they made their first appearance in the game. The teams managed to make it to the semi-finals however, couldn’t win the season.

The gameplay for the team in 2009 was also not in much favor as the team couldn’t make it to the winning. However, the game in 2010 was a great one for the team England. They won against Pakistan by one run.

It is now interesting to watch the gameplay for the season for the 2021 season of the tournament.