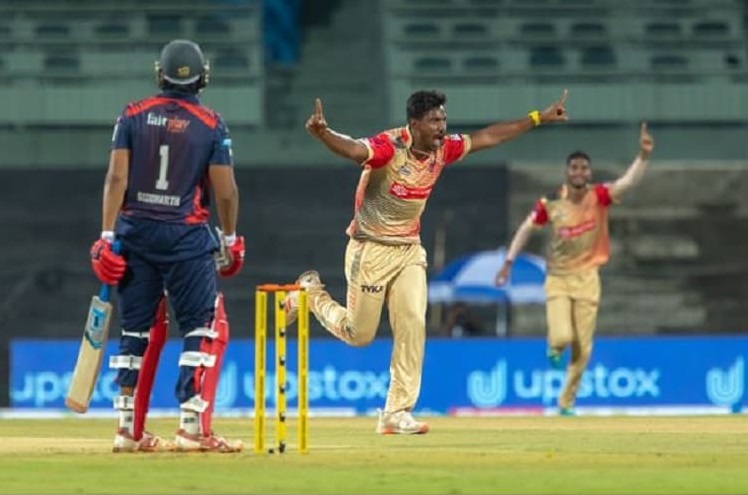 Tiruppur Tamizhans failed to recover from the initial reversals and were 64-7 in 16.2 overs when rain intervened. Aswin Crist (23 not out off 25 balls) and captain M Mohammed (10 not out off 33) defied the CSG attack to give some respectability to their innings. The 40-year-old Sathish, who opened the attack for the defending champions, forced the rival batsmen to make errors on a helpful pitch and returned fabulous figures of 4-0-10-5. It was the second-best bowling display in

TNPL behind teammate Ramadoss Alexandar’s 5-9 against Ruby Trichy Warriors at Tirunelveli in 2019.

Sathish got into the act with the second ball of the innings after CSG captain Kaushik Gandhi won the toss and put the opposition into bat. Opener S Dinesh (0) was the victim, edging the bowler to wicketkeeper Narayan Jagadeesan. Sathish was in the thick of the action in the second over as well when he dived full length to his left in the slips to grab an edge that flew off S Siddharth’s bat off Rahul Dev’s bowling.

In his second over, Sathish struck a double blow claiming left-handed S Aravind (7), caught by a diving Jagadeesan behind the stumps and then trapping Francis Rokins leg before wicket off the next delivery. Sathish went on to add Tushar Raheja (6) and Rajappa Rajkumar (0), to his kitty in the following overs to end up with his best bowling display in the tournament.

Tiruppur Tamizhans’ total after the Powerplay read a sorry 24-5 with Sathish (3-0-4-4) doing most of the damage. To make matters worse the resilient Maan Bafna (6) was run out after a mix-up and they were reeling at 36-7 at that stage before Crist and Mohammed got into the rescue act.