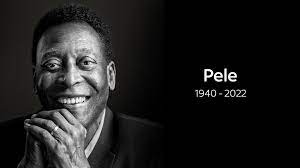 Beginning on Monday with a 24-hour public wake at the stadium of his longtime team, Santos, Brazilians said their final goodbyes to football legend Pele this week.

The “King” of football, who passed away at the age of 82 on Thursday after a protracted battle with cancer, will be remembered by many supporters at the team’s oceanfront stadium, known as “Peixe” (fish) in Portuguese.

At 10:00 am local time, stadium doors will open (1300 GMT). In the middle of the pitch will lie a casket with the remains of the sole player to have won three World Cups.

The stadium, which is black and white and is called Vila Belmiro after the district where it is situated, can hold 16,000 spectators.

Three enormous banners were visible in the stands on Sunday, one of which had Pele wearing the renowned number 10 on his jersey.

According to organizers, entry to the stadium would be permitted up until 10:00 am on Tuesday.

A parade will thereafter be held through Santos’s streets. Santos is a port city located around 75 kilometers (47 miles) from Sao Paulo, the state capital.

The march will pass by the home of Pele’s mother, Celeste Arantes, who is 100 years old and is not aware that her renowned son has passed away.

She is unaware, “Maria Lucia do Nascimento, Pele’s sister, told ESPN on Friday. “She is not awake.”

Pele will be buried in a unique mausoleum at a cemetery in Santos where the parade will come to a finish.

Honors for the “eternal” star

Pele, who was born Edson Arantes do Nascimento, is widely regarded as the greatest player to have ever played the beautiful game.

His passing generated a flood of condolences from all across the world, and his native Brazil observed three days of national mourning.

In a 21-year career, he scored 1,283 goals, with the majority coming while playing for Santos.

When Pele was 15 and began playing professionally with Santos.

Then came the 1962 and 1970 World Cup victories. The latter was the apex of his career since he was a key member of what many people think is the greatest squad in history.

Pele’s health had been progressively worse in previous years.

Three weeks before his passing, he was still active on social media, supporting Brazil at the World Cup in Qatar and comforting the pre-tournament favorites when they lost in the quarterfinals.