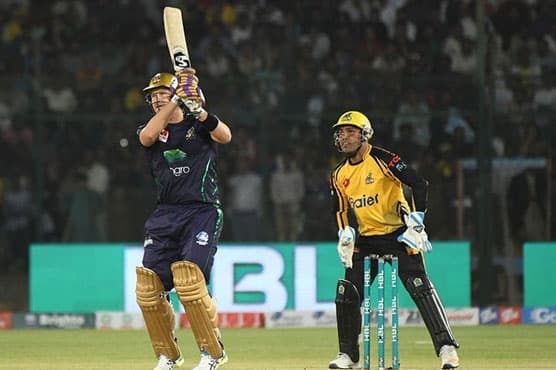 Quetta Gladiators vs Peshwar Zalmi will play the 19th Match of Pakistan Super League 2021. The match will be live from Sheikh Zayed Stadium, Abu Dhabi. Quetta Glaidotrs is stading at the last position in PSL 2021 Points tabl;e. So the teams need to win the upcoming matches to reach the knockout stages. While Peshwar Zalmi standing in the 4th Position with 3 wins from 6 matches. Quetta Gladiators vs Peshawar Zalmi Head to Head, Match Prediction, Dream11 Squad, Today Pitch Report, QTG vs PSZ Practice match highlight.

In the 19 Match of PSL 2021, Peshwar Zamlmi will have more chances to win. Quetta Gladiators already faced four losses in just five matches. So it will be a very tough match for Quetta Gladiators. But the Peshwar Zalmi team performing well in previous matches.

After facing defeat Peshwar Zalmi comeback with three consecutive wins in PSL 2021. So definitely the precision for the 19th Match is Peshwar Zalmi will defeat Quetta Gladiators.

The Live Score of Islamabad United vs Quetta Gladiators will be available on the Page.

The last four matches played in Abu Dhabi won While Chasing. 3 Out of 4 matches won by batting second. Only one match won while defending. So the competitive target for the upcoming match will be 180 or 180 Plus.

To defend the target, the 1st Batting Team Needs to set a target of 180 or Plus. If the team won the toss, then the team should go for Bowling first. As statistics shows, Chasing will give benefit the team to win.

Peshawar Zalmi won all three Matches by Chasing Target. So it will be an advantage for Peshawar Zalmi. If the Quetta Gladiators will win the toss then the team should go for Bowling First. Otherwise, Quetta Gladioptrs needs to set a target of 190 or Plus for the competitive score. Because Peshawar Zami Won Two Matches while chasing 190 Plus and 200 Plus Target in PSL 2021.