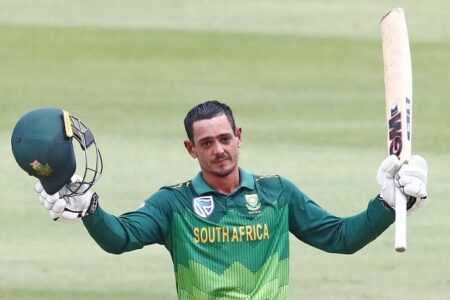 India lost its second match against South Africa in which Quinton De Kock become Man of the match and Sa beat India by 7 Wickets.

KL Rahul won the toss and elect bat but after this Kohli make 0 runs, in this match Rishabh Pant play a good inning and give a target of 288 runs to the host team

In the last days, Quinton becomes the father of little angel and because of this he doesn’t playtest series but after this now he is on the team.

Opener Quinton de Kock, who made a century partnership of 132 runs between the two for the first wicket, played an innings of 78 runs.

For this, an excellent performance he becomes “Man of the Match”. After Quinton de Kock was selected as the player of the match.

“Staying away from the game has an effect on us. So I enjoy spending time at the crease. I and Malan are batsmen of the same style but he knew that his job was to give me the strike today. I didn’t know Venkatesh was out, I just appealed and the umpire took the help of the third umpire.”

With help of all these score teams, India gives a target of 288 runs to the SA team, in which batters and bowlers both play well.

South Africa came for chasing this record in which Quinton and Malan make a partnership of 132 runs However, Shardul Thakur gave Team India the first breakthrough by dismissing De Kock for 78.

Malan gets out by Jasprit Bumrah on a score of 91 runs.

While captain Temba Bavuma makes 35 runs he gets out by Yuzvendra Chahal for 35.

Van Dar Dusen partnered with Aiden Markram to lead the team to victory by 7 Wickets and won this series also.