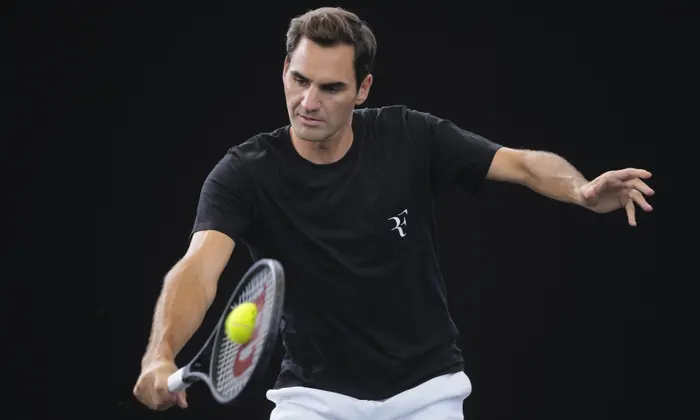 They have spent many of their best years competing against each other on the grandest stages and taking their sport to unprecedented peaks. Without a doubt.

Federer responded “no doubt” when asked if he would be interested in a partnership with Nadal on Wednesday.

“I think it sends a great message to not just tennis but sports and maybe even beyond that we were able to go through a career that we both have had and come out on the other side and have a nice relationship.”

Given the limits of his surgically repaired knee, Federer declared last week that he would only be able to compete in doubles at the Laver Cup in London, where he announced his retirement.

Since his 1998 debut, he has played in over 1,500 matches and won 20 grand slam titles. He will play his final match on Friday’s first day of the competition.

The music, the reporters, the crowd, everything—I was in a very frightened, scared place, Federer recalled. Knowing how much it matters to me and still being able to talk about it normally and objectively.

The last phases of retirement are never simple, but for Federer they have been especially trying. His last singles encounter was a crushing loss to Hubert Hurkacz in the Wimbledon quarterfinals last year; his knee gave out in the third set, and he fell 6-0.

With the hope of making a full recovery and returning to competition, Federer underwent surgery in August and started rehabilitation in September.

You are becoming very pessimistic. Furthermore, I received a scan result that was less than ideal. You’ll stop and say, “OK, we’re at a crossroads here, and you have to make a turn.” How do I get there? I didn’t want to go the “Let’s risk it all!” route. That’s too big of a step for me right now.

For a long time, he was lauded for his remarkable lack of serious injury. He had always planned on retiring without ever needing surgery, but three knee procedures since 2020 have forced him to adjust his expectations. He claims he feels OK when playing, but the emotional wounds of his career have led him to call it quits.

He remarked, “I get worried going too far.” For the simple reason that I have no desire to bang it up and cause it to behave erratically (which you can). Otherwise, I’d be free to go play.

As a player, it can be difficult to put your past injuries and procedures out of your mind.

Federer is confident that he will spend the upcoming holidays with his wife Mirka and their children, but he is less certain about his long-term plans as he prepares to retire. The Wimbledon commentary might be a part of it.

The idea that I could ever be a journalist or provide insightful analysis has always seemed far-fetched to me.

There are currently no intentions for me to be forthright, but about six months ago (or longer), I thought to myself, “Oh, you know what? Maybe I could see myself doing something like this occasionally, whether it’s commentating on a sport or giving back to the community. For a while there, I was completely taken aback. Seriously, I can’t believe I just said that. To that end, we shall wait and see.

Before the US Open, Federer considered making a retirement announcement but ultimately decided he wanted to be there and go out on top.

The Laver Cup, organised by his management organisation, Team8, was a perfect setting for his match. It’s in London, the city that has defined his career from the moment he won his first grand slam trophy at Wimbledon in 2003 to the present day, when he has a record eight Wimbledon titles and has won two ATP Finals titles at London’s O2 Arena.

He explained that he did not feel alone in his retirement announcement because of the company of the other men present.

Not to steal the show or anything, but, “I always feel sad for players who sometimes retire on tour, say: ‘I’m going to play one more match.’ then at one point you lose and there you stand all alone.”

That won’t happen in his final show. I’m practising doubles right now, and we’ll see who I end up playing with in my final match,” he remarked. I haven’t played in a long time, so I’m a little anxious about going in. I’m going to try my best to compete.