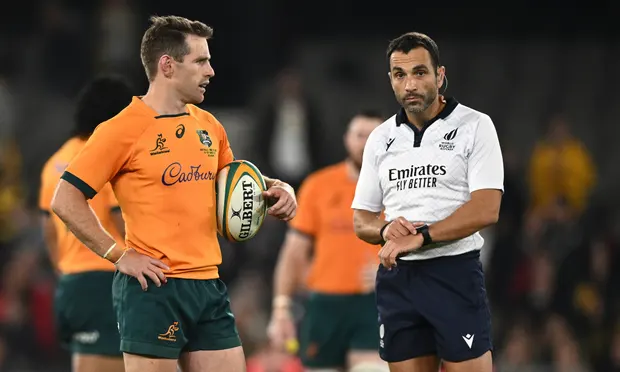 Rugby’s Groundhog Day: in 30 years not as much has changed as we think. Clearer instructions have never been printed. ‘Make the game more entertaining for players and spectators alike,’ yells the editorial.

Simplifying the rules to decrease the frequency of stoppages and increasing referee uniformity are only two of the many concrete suggestions made by elite players. Someone else implores, “Clamp down on crooked feeds by scrum-halves.”

It’s like Groundhog Day, but for rugby union. While cleaning out a closet over the weekend, I found a copy of the Rugby Who’s Who from 30 years ago.

The opinions of the old-school players that my press box buddy Alex Spink so brilliantly compiled should be as relevant today as they were in ancient Greece. But significant portions of it sound like they were just dictated yesterday.

Envision discovering a time capsule from the distant past only to find that little has changed since it was buried. Let the game continue without interruption.

Pontypridd’s Dale “The Chief” McIntosh moaned about how often play was interrupted for no good reason. Hawick’s scrum-half Greig Oliver in Scotland sounded similarly frustrated. The scrum should be used to kick off the game rather than as a last resort.

How about this from Rob Howley of Wales? There should be less kicking and more running. The England centre, Bryan Barley, also had this to say. Instead than focusing solely on fitness and game planning, “make sure talents are coached in practise.”

Or perhaps Donal Lenihan of Ireland’s view. Bring refereeing interpretations in the northern and southern hemispheres in line with one another. Does this sound familiar to anyone?

Clearly, rugby union has not advanced as far as some may think.

Professionalism has undoubtedly shifted the target posts in terms of pay, physique, and fitness, but there is more in common between today’s players and their forebears than might at first appear.

This raises the intriguing query of whether or whether people will still be griping about the same issues in 10, 20, or 30 years.

By the way, this is in no way intended as criticism of today’s officials, who are unquestionably in better physical shape and have received more meticulous training.

There was much discussion over the late intervention by Mathieu Raynal in the Australia-New Zealand Test in Melbourne, even in these pages, but that issue has been settled. Whether right or incorrect, a single high-profile occurrence is less important than the growing inconsistency of timekeeping.

Wasps face relegation as the financial crisis in English…

Siobhan Cattigan’s teammates reject comments by the head of…

Go back in time to last weekend’s Argentina vs. South Africa game and you’ll see the Pumas kicker, Emiliano Boffelli, routinely taking longer than the allotted 60 seconds on his early kicks at goal.

What more could have made the Avellaneda stadium, where Argentine club Independiente plays, even better? That’s right, a “shot clock” to give everyone a clear indication of the time remaining.

In a similar vein, Melbourne. For the most part, Brendan Foley’s Wallaby forwards were still clustered together behind him, which is why he did not kick the ball to touch a little earlier. Australia would have been doomed if he’d gone ahead and failed to make touch.

But what if the timer had been shown prominently on the screen for both teams to see? This development would have had far-reaching implications for the story.

The difference between what neutral fans of the sport expect from a big contest and what they actually experience was on full display during the Pumas and Springboks encounter.

If you were in Buenos Aires for the game, you would have been compelled to put on a light blue and white jersey and clutch the badge firmly when the anthem played. The rest of the game was marred by stifling defence, questionable penalty calls, unnecessary timeouts, and TMO interference.

That is to say, it’s not that dissimilar from the early 1990s. Listening to the forward-thinking suggestions made by key actors at the time is fascinating.

Scotsman David Sole suggested that the game be altered so that more points were awarded for a try rather than a successful kick. The following year, in 1992, the value of a try was increased from four to five points. Doddie Weir proposed eliminating conversions.

It hasn’t occurred yet, but maybe we might reduce the amount of time people waste by awarding six points for a try and one point for a conversion (through a drop goal) in the modern era.

Once again, Simon Halliday of England has devised a brilliant plan. Only foul play or intentional offside will result in a free kick opportunity.

His companion, Jeff Probyn, was likewise planning ahead. One possible solution is to have touch judges take on a larger role in game management. And given where we are right now, it’s probably best to file it under “Be Careful What You Wish For.”

However, jokes aside, the sport cannot afford to stay stagnant in the face of mounting evidence that former players who have had repeated concussions are at an increased risk of developing dementia in their later years.

Administration in the sport can no longer rely on players to save them from disaster.

There must be a higher duty of care, which may necessitate significant alterations to existing laws.

In 1991, Scotland’s Craig Chalmers said, “play the game without flankers,” while his colleague Finlay Calder said, “excellent rucking, although it looks vicious, is as safe as anything.” If the player welfare research being done now ends up validating these statements, then so be it.

But one thing is for sure: Rugby is and always will be a flawed sport. To that end, I hope that the final weekend of the Rugby Championship is inspiring, and that we can all look back on the tournament and marvel at the greatness of the game. But if we learn anything from the past, it’s that we can never reach consensus on how the game itself should be shaped.