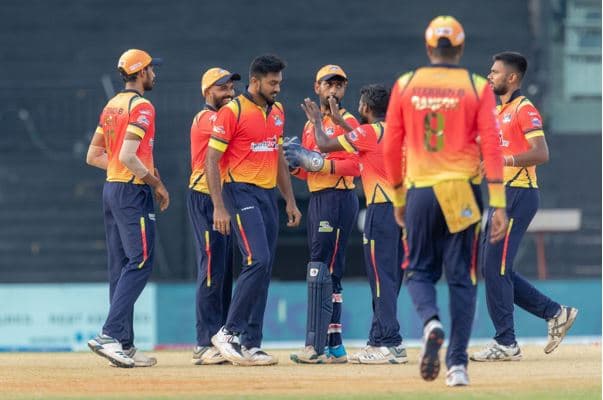 Chennai, August 1: Ruby Trichy Warriors did everything right from the time they won the toss to secure a six-wicket victory against Salem Spartans in their Shriram Capital Tamil Nadu Premier League at the MA Chidambaram Stadium here on Sunday.

The Trichy bowlers led by their captain Rahil Shah (1-16) did a remarkable job of containing the rivals to 116 in 20 overs and then attained the target in 18.3 overs. They scored 120 for 4 with left-hander Adithya Ganesh (28 not out off 32 balls, 1 six) and all-rounder Anthony Dhas (24 not out off 20 balls, 1 four, 2 sixes) leading the run charge by raising 49 runs off 44 balls for the unbeaten fourth wicket.

Pacer Ganeshan Periyasamy (2-17) did create some problems for Trichy by dismissing opener S Santosh Shiv (6) and Nidhish Rajagopal (22 off 22 balls) but they were always in control of the chase.

Rahil was relieved that his team finally got back-to-back wins but feels the batting still needs improvement. “It feels great, finally we won back-to-back matches. We have a six-day break so it’ll be good, relaxing for us.”

“I’m pretty happy with our bowling, in batting we haven’t been getting the starts we wanted, so we want to address that,” he said.

Rahil indicated Adithya Ganesh has a big role to play in the side and he has been handling it well. “Adi’s role is very vital, we have given him the responsibility of finishing matches and touchwood, he has been doing that for us and hopefully continues to do it,” he said.

Earlier, all six bowlers employed by Rahil returned at least a wicket each. None of the Salem batsmen got going and for the second match in succession, Murugan Ashwin (21 off 21 balls, 2 fours) emerged as the highest scorer for the side. The leg-spinner had earlier scored 47 off 38 balls in their 76-run defeat to Dindigul Dragons.

Murugan Ashwin admitted the Spartans have not delivered when it mattered but was optimistic of a turnaround. “Firstly, we have to accept that we didn’t play the brand of cricket which we wanted to play. The preparations going into the tournament were really good but it’s about batsmen taking the responsibility and at times bowlers also doing the same. I think there are a few things we have to address as a team if I have to be critical. It’s a short tournament so momentum matters a lot. We have two more games so we’re hoping we can address those issues and come back stronger,” he said.

Upstox Most Valuable Player of the Match: M Poiyamozhi (RTW)