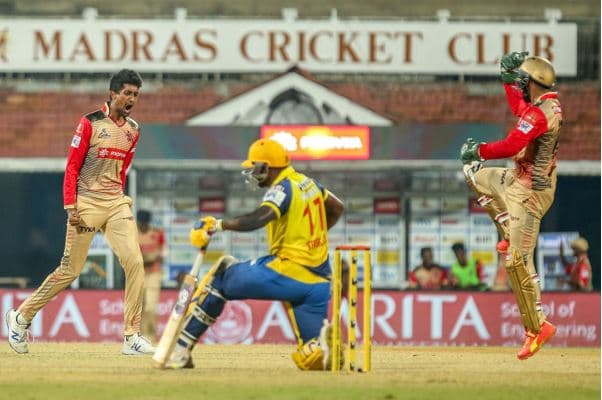 The left-arm spinner justified his reputation as the highest wicket-taker in the tournament (47 wickets from 33 matches) by doing most of the damage and his victims included the prized scalp of Dindigul captain C Hari Nishaanth (39 off 31 balls, 1 four, 3 sixes) and the dangerous Vivek Raj (16 off 9 balls). Sai Kishore and pacer Sandeep Warrier (1-21), who were on national duty in Sri Lanka last month, returned for the marquee clash against Dindigul and made an

immediate impact to help Chepauk defend their total with aplomb. Chasing 160 for a win, Dindigul ended up on 135-8 in 20 overs.

Dindigul were cruising at 77-1 at the halfway mark but Sai Kishore turned the tide by claiming four wickets, backed by brilliant fielding, to leave them gasping. It also turned out to be a good outing for Warrier, making his debut in the tournament.

Sai Kishore was elated at helping his side win but he felt he could have done better. “It feels good to have performed but I could have bowled a lot better. I still feel my instincts weren’t great and I can improve a little,” he said. The lanky bowler stressed there was no special preparation for the game, he just went with the flow. “There was no special plan because the last game I played was in February. So I wasn’t sure about what I’m going to do. When you play matches regularly your

instincts will be better but the only thought I had was that whatever the situation, I should adapt and bowl. I also felt like the wicket was a little sticky so that helped a lot,” he explained.

It was a good opportunity for Dindigul to get even for their defeat in the last season final but they failed to grab their chances in the game.

Captain Hari Nishaanth admitted he should have shored up the side and was responsible for the defeat. “We were holding the edge even while chasing, till the 10th over we had the game. One guy got out after scoring 30-plus and that was me! I should take the full blame as I should have batted till the end, but it’s good learning and I hope I learn things faster as a leader and not repeat such mistakes,” he said. Earlier, Dindigul bowlers did well to restrict Chepauk for 159-7 in 20 overs. Chepauk had a blazing start with their captain Kaushik Gandhi leading the charge smashing 45

off 31 balls, 5 fours, 2 sixes. Along with Narayan Jagadeesan (40 off 27 balls, 3 sixes), Gandhi put up 73 runs in 7.4 overs but once he was bowled by pacer Lakshminarayanan Vignesh, Dindigul clawed back.

In the next 12.2 overs, Chepauk could add just 86 runs for the loss of six wickets. Left-arm spinner M Silambarasan spearheaded Dindigul’s fightback despite going for 12 runs in the first over to end up with fantastic figures of 4-1-18-2. The 23-year-old’s scalps included Jagadeesan and all-rounder Satish Rajagopal (11).

Left-arm paceman Gurjapneet Singh also turned in a similar display after conceding 11 runs in his first over. The 23-year-old went wicketless but he played a key role in choking the run flow by conceding just 12 in his next three overs.

Barring the openers, Uthirasamy Sasidev (29 off 24 balls, 2 four, 1 six) was the only other batsman who had some measure of the Dindigul attack.

Upstox Most Valuable Player of the Match: M Silambarasan (DD)