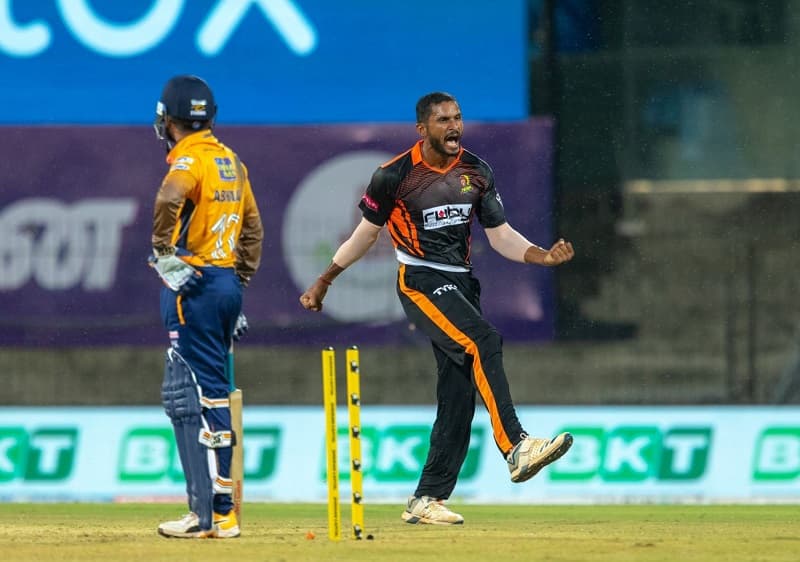 Chennai, July 21: The Shriram Capital Tamil Nadu Premier League came to life on Wednesday after a series of rain interruptions with two debutants stealing the show at the MA Chidambaram Stadium here.

While Sathvik cracked 71 off 52 balls (six fours, two sixes), Mathivanan claimed three wickets off four balls to hasten the collapse of Royal Kings, who were bowled out for 77 in 13.4 overs.

Nellai vice-captain Baba Indrajith while expressing his disappointment at the defeat felt it was good the reverse happened at the start. “No one wants to start off like this, that too by a huge margin but the run rate will come into play at some point in the tournament but no problem. It is good that it happened in the beginning itself and we’ll try and bounce back in the coming games. I’m very confident that we have a good team, if we play to our potential, I genuinely think we will go to the top 4,” he said.

Nellai wicketkeeper Baba Indrajith (32 off 31 balls) and all-rounder Sanjay Yadav (28 off 22 balls) tried to shore up the side after early reversals had left them reeling at 12-5 in the 5th over. They raised 63 runs for the sixth wicket but Yadav was brilliantly run out by Sathvik. Thereafter, it was all downhill for Nellai and they lasted just two runs as Mathivanan ran through the side.

Thereafter it was an uphill task for Nellai.

Earlier; Sathvik’s innings came close on the heels of another debutant Bhardwaj Sai Sudharsan’s 81 of Lyca Kovai Kings in the opener against Salem Spartans.

The 19-year-old Sathvik’s knock came under difficult circumstances as Trichy Warriors lost two wickets early. Opener K Mukunth (1) was claimed by pacer T Ajith Kumar in the second over of the innings and No.3 Nidhish Rajagopal was dismissed for naught by Athisayaraj Davidson in the next over and Trichy Warriors were in trouble at 15-2.

But Sathvik in the company of senior club mate Adithya Ganesh (33 off 36 balls; 2 fours) went about the repair job with purpose. While Ganesh played the guiding role, Sathvik went after the bowlers and the duo raised 90 runs in 12.1 overs for the third wicket.

Though Sathvik was claimed by pacer Sharun Kumar (2-39), all-rounder Anthony Dhas ensured a good finish for Trichy Warriors with a 20-ball 35, hitting three sixes and one four.l as they finished on a respectable 151-5.

All-rounder Sanjay Yadav (1-19) and Ajith Kumar (1-18) were among the most economical bowlers for Nellai.

Upstox Most Valuable Player of the Match: Antony Dhas (RTW)