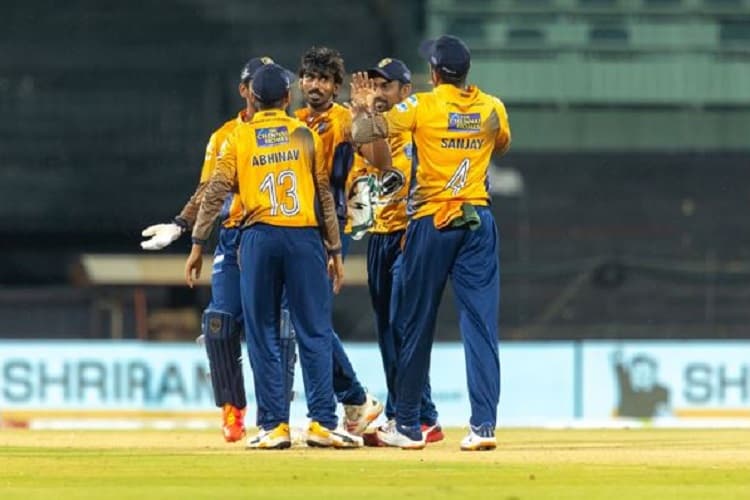 Chennai, July 21:  It was the turn of another debutant to be under the spotlight at the MA Chidambaram Stadium on Wednesday. Young Amith Sathvik led the run-charge single-handedly for Ruby Trichy Warriors against Nellai Royal Kings in their Shriram Capital Tamil Nadu Premier League.

The 19-year-old struck a brilliant 71 off 52 balls to help the Trichy Warriors to 151-5 in 20 overs.  He struck six fours and two sixes. Sathvik’s innings come close on the heels of another debutant Bhardwaj Sai Sudharsan’s 81 of Lyca Kovai Kings in the opener against Salem Spartans. Sathvik’s innings came under difficult circumstances as Trichy Warriors lost two wickets early. Opener K Mukunth (1) was claimed by pacer T Ajith Kumar in the second over of the innings and No.3 Nidhish Rajagopal

was dismissed for naught by Athisayaraj Davidson in the next over and Trichy Warriors were in trouble at 15-2.

But Sathvik in the company of senior club mate Adithya Ganesh (33 off 36 balls; 2 fours) went about the repair job with purpose. While Ganesh played the guiding role, Sathvik went after the bowlers and the duo raised 90 runs in 12.1 overs for the third wicket.

Though Sathvik was claimed by pacer Sharun Kumar (2-39), all-rounder Anthony Dhas ensured a good finish for Trichy Warriors with a 20-ball 35, hitting three sixes and one four.

All-rounder Sanjay Yadav (1-19) and Ajith Kumar (1-18) were among the most economical bowlers for Nellai.