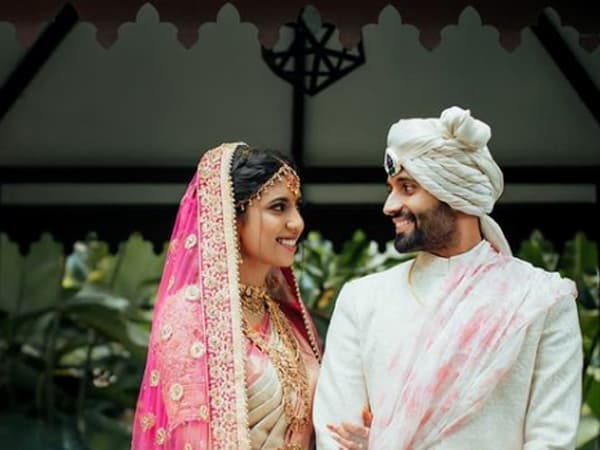 Shreyas Gopal has married his long-time girlfriend Nikita Shiv. Shreyas and Nikita were in a relationship with each other for a long time, but now they have taken seven rounds.

Cricket Fans and Die-hard fans of Shreyas Gopal are trying to know who is Nikita after all, so let us introduce her to you.

All rounder Shreyas who played for Rajasthan Royals in IPL 2021, has tied the knot. Shreyas from Karnataka married girlfriend Nikita Shiva.

Both were in a relationship for a long time. Shreyas Gopal proposed his girlfriend Nikita Shiv on 11 August 2021 in a very filmy style.

Nikita Shiv has done her graduation from Manipal Institute of Technology. Nikita Shiv after completing her studies worked in many software companies in Bangalore.

After this he started a company called The Mana Network.

Photos of Shreyas Gopal got Viral she loves traveling

He also shared the picture of his wedding in the caption and wrote, ‘24.11.2021. Nikki said yes. Gopal and Nikita got engaged this year.

The wedding photos of these two are becoming fiercely viral on social media. Shreyas Gopal shared pictures from his wedding on Instagram.

Nikita Shiv is very fond of traveling. She often shares pictures on her Instagram. Apart from this, Nikita Shiva pays a lot of attention to her fitness.

She loves working out in the gym. This couple has also shared some special photos of the wedding on Instagram.