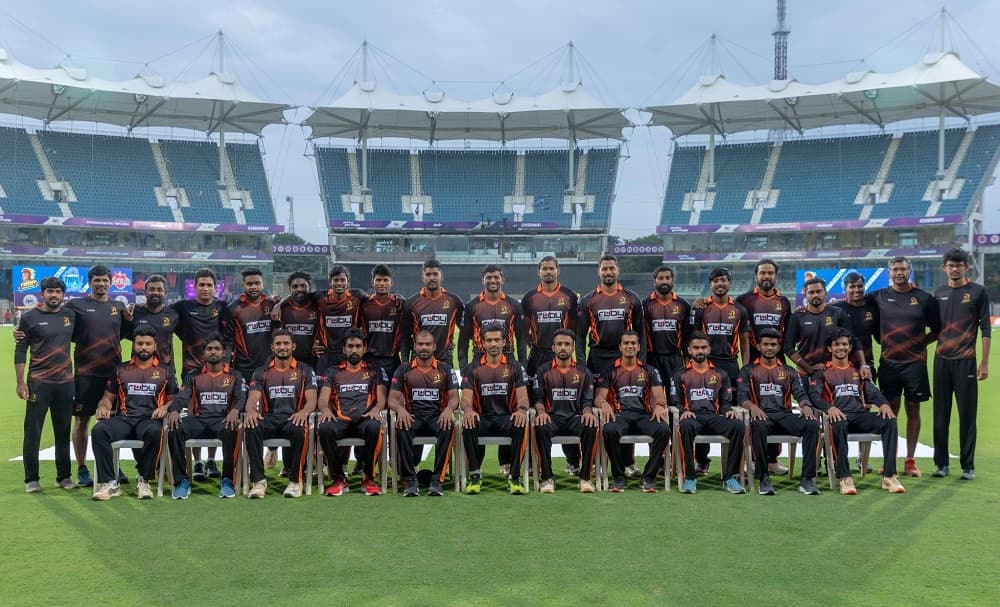 Chennai, August 16: The start was not on expected lines for the Ruby Trichy Warriors. Their campaign in the Shriram Capital Tamil Nadu Premier League suffered a blow when two of their most experienced players and the tournament – Murali Vijay and Aniruda Srikkanth – pulled out citing personal reasons.

For a team that had not progressed beyond the sixth place in the history of the tournament, the absence of two certain match-winners left a gaping hole in their plans. Yet, they shredded the formbook, won the maximum number of matches (6 wins, 3 defeats), topped the league, and made it to the final.

Chepauk Super Gilies may have won the title but it was Trichy that won the hearts. Even in the title clash, they made their rivals sweat before losing narrowly by eight runs.

The Trichy fairytale has its origins in the build-up to their campaign. The coaches and players reveal that the entire squad was determined to do away with the ‘no-hopers’ tag and it showed in their intense training sessions. “We practiced the hardest among all the other teams,” was the common refrain of all the senior players. Each player was assigned a role and they stuck to their tasks admirably well. Soon, the absence of Vijay and Aniruda was no longer felt.

“In our first team meeting after coming out of quarantine, we mainly spoke about proving everyone wrong who said we were underdogs. So we planned around that and took it match by match,” assistant coach, P Subramani said. Their batting mainstay Nidhish Rajagopal reinforces Subramani’s views, adding, “we are the team that practiced the most and focussed on the process a lot.”

The captain’s armband was handed to Rahil Shah, a veteran in this format, whose quality left-arm spin bowling and agility in the field often stood out. “It has been an unbelievable journey,” he exclaims and explains how he fitted into the scheme of things. “I was not sure about my role when the tournament started but when captaincy was given to me I took it in a nice way. A couple of key players were missing but we made sure those responsibilities were given to youngsters, who stepped up and performed. We also practiced hard and planned our sessions really well and it worked for us,” says the 36-year-old.

The results of their hard work bore fruit in their opening game itself when they trounced Nellai Royal Kings by a big margin of 74 runs. However, that success was short-lived as they crashed to an eight-wicket defeat to Lyca Kovai Kings and soon the failures of the past seasons began to haunt them again. But they bounced back quickly with a three-wicket victory over Siechem Madurai Panthers and went on to win four more with just a defeat to Dindigul Dragons. And they were the only team to get the better of Chepauk twice, before losing their clash.

A vital cog in Trichy’s wheel of success has been Adithya Ganesh, the only player who has been with the franchise from the start. It has been a revelation, how this senior player has anchored the innings, adopting a cool and calm approach. The 30-year-old left-handed batsman has been on the fringes of selection for the Tamil Nadu in the past with sterling displays in the TNCA First Division League (nearly 600 runs in the 2017-2019 seasons) but he has caught national attention with his performances in the TNPL this year (249 runs from 9 matches).

A high point was his unbeaten 66 off 45 balls in Qualifier 1 against Chepauk. It was a tense finish as Chepauk had clawed back into the game and made things difficult in the final over bowled by Manimaran Siddharth. With three needed from two balls, Adithya finished the game in style with a massive six over midwicket to leave the left-arm spinner stunned. That shot was also a statement about Trichy’s rise.

“He’s been really fantastic for us,” says Rahil about Adithya. “When we are chasing 130-140 his role is to take it till the end and finish it, he’s been doing that so I’m really happy for him. He’s been one of the guys who has played for Ruby for 3-4 years and for him to come up with a special knock in Qualifier 1, I’m really happy for him,” he adds.

Adithya has also essayed a key role in building the confidence of the 23-year-old Nidhish, the highest run-getter for the side (306 runs from 9 matches). Their partnerships have largely been responsible for Trichy’s last four victories. “Nidhish has been really good for us,” points out Rahil. “He’s been coming at crucial times and scoring crucial runs for us. Most of the matches we’ve been losing a couple of early wickets but he and Adi (Adithya) have taken us through on 3-4 occasions and since the first match against Madurai when both of them got out cheaply, they’ve been finishing games for us,” he says.

P Saravana Kumar is another senior player who has put his hand up and manned the bowling department brilliantly. The 32-year-old has surprised everyone with his pace bowling and leads the wicket-takers chart of the tournament with 13 scalps from eight games. His contributions haven’t ended there as he has come up with some lusty hits when needed. The Coimbatore all-rounder nearly pulled off a coup in the final with his unbeaten 42 off 25 balls.

The 21-year-old M Mathivanan, who made his debut this season, has also been a revelation claiming nine wickets from as many matches with his left-arm spin. Other youngsters all-rounder Muhammed Adnan Khan (21 years) and opener VP Amith Sathvik (19 years) too have match-winning displays under their belt, lending credence to the fact that almost everybody has contributed to their campaign.

Shyam Kangayan, CEO & Executive Director,  Ruby Trichy Warriors, aptly sums up his team’s journey this season: “It’s a phenomenal feat by the Ruby Trichy Warriors team in spite of a couple of senior players opting out of the tournament due to personal reasons. It’s a dream come true for us. This young team has clearly proved that this game can be won with sheer grit, perseverance, and team work. Captain Rahil Shah has led brilliantly with the guidance of our dynamic coaches Jaya Kumar and Sreekumar Nair (former Kerala captain). Every player and every staff took the responsibility, rose to the occasion and emerged as a superstar. It’s truly an inspiration for other teams. From underdogs to becoming the top team in the league is a tremendous achievement and full credit goes to each member of the RTW team.”

lost to Dindigul Dragons by 5 wickets

The men who mattered

Assistant coach P Subramani analyses the Trichy’s players who were key to the team’s glorious run this season.

In the 5 years that I have seen him I can say that he knows how to handle people well. He gave the best he could from his side and was also able to get the best out of the others. He knows what each player is capable of and has extracted the best out of them.

He’s been with us for 4 years now and he knows what the team needed, so he took up the role of playing every innings fully upon himself.

He is an excellent player with a bright future and his contributions have been brilliant for Ruby this year. He will do well in the future.

I stand behind the stumps with a mitt and catch balls coming in and his are the most difficult when compared to any other bowler. He has a good nip off the wicket and bowls in the right areas. He executes whatever we tell him to. With the bat he’s a great hitter who can get the score up anytime. He’s our trump card.